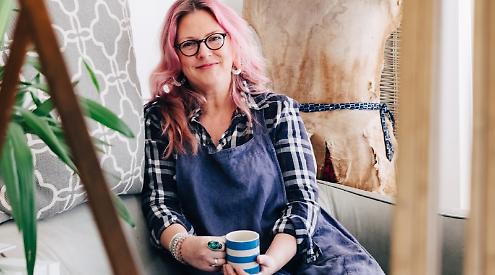 AN artist from Henley has been criticised for converting her garage without planning permission.

Jo Harris is seeking retrospective planning permission to install a toilet with sink, electricity and two roof lights at the building in Newtown Gardens.

Miss Harris, who is the founder of Henley School of Art, does not own the building but wants to use it as a studio.

In the spring she was forced to switch to online classes after deciding not to renew the lease on the art school building off Hart Street following a decline in students as a result of the coronavirus pandemic.

Neighbours in Harpsden Road say they will suffer a loss of privacy as a result of the conversion as they are overlooked.

Marie Byrne said: “The property is at the bottom of my very small garden, already overlooked by three other properties.

“Although the application says that the work would not result in undue light pollution or loss of privacy, this is not the case. The planning application says Velux roof lights but there are versions that open for ventilation. Also, these could be changed at a future date without any further consultation. The previous planning application referred to in this application was only granted on the grounds that there would be no windows of any sort on my side of the building.

“There has been no change that would now make any kind of windows acceptable.

“The proposed studio and office, which the application fails to mention, would be a commercial property in a heavily residential area with no significant benefit to the neighbourhood.

“Parking is a problem in the area, so much so that a resident of Harpsden Road is currently applying for disabled parking to ensure a parking place.

“It is a pity this garage is not being used for its intended purpose in an area that badly needs parking facilities due to multi-vehicle ownership in Harpsden Road and overflow parking of Newtown Garden residents.

“The density of the parking has caused accidents in Harpsden Road in the past. This planning application does not add anything to the area except problems, nuisance and dangers to the current residents.”

Neighbour Margaret Dewdney said: “Looking from my back bedroom window at the positioning of the Velux windows in the conversion, I’m not happy.

“They are very close to both 107 and 105 Harpsden Road, the building being right on our fence line.

“In the previous plans passed on this property, the apex of the roof had been flattened and the windows were situated in the flattened area of roof looking skywards. This is a much better solution.”

Members of Henley Town Council’s planning committee were split on the issue. Councillors Stefan Gawrysiak and Ian Clark felt the application should be approved.

But Councillor Ken Arlett disagreed, saying: “As you go down Newtown Gardens from Harpsden Road there is a row of these garages on the left-hand side. They were built for the properties opposite, although some have been purchased over a period of time.

“My view is they were built as garages and should be used as garages and once you allow this you will probably end up with all of them [being developed].

“You will have change of use from a garage and have cars parked all over the place down that road. I really can’t believe this — it’s crazy.”

Councillor Lorraine Hillier agreed, saying: “We commonly used to complain about garages being converted because there is an impact on traffic on the road.

“While we are trying to get rid of cars, nevertheless we have to accept that most houses have at least one car and it would be preferable to retain the garage.”

The committee voted to recommend the application is refused due to the loss of car parking and the conversion being unneighbourly.

South Oxfordshire District Council, the planning authority, is due to make a decision by June 14.