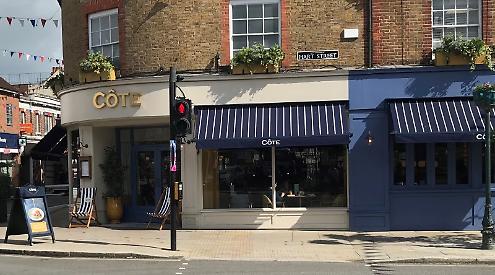 A HENLEY restaurant has vowed to keep the pavement outside its premises cleaner.

Côte, on the corner of Bell Street and Hart Street, was responding to a resident who complained that it was leaving out rubbish for collection that stained the paving.

In a letter to this week’s Henley Standard, he says: “The main crossroads of our beautiful town is being used by the Côte restaurant to dump its waste and bottle bins for collection.

“The pavement has been badly stained by what looks like cooking oil.

“The overall effect is absolutely disgusting. No other business in Henley would ever think of dumping its bins on the public pavement to await collection, especially not a restaurant. This is Henley-on-Thames, not some downmarket suburb in the sticks.”

Restaurant manager David Wilkins said the business, which opened on January 31, had been experiencing difficulties with its daily rubbish collections due its waste contactor Biffa having a shortage of drivers.

This meant that plastic bins containing glass and food waste and bags with general waste were not collected sometimes.

He said: “We do not have a back entrance so we have to put our bins out the front. We try to put them out last thing and they should be picked up first thing but we have been having so many issues with waste collections.

“We always chase them but if they do not have drivers, it’s very difficult — it’s a lose-lose situation.

“We do not want to pollute the town at all and will continue to do all we can to solve the problem. We want to be part of the community and good neighbours.”

Mr Wilkins said that this week the pavement had been jet-washed and specially cleaned with chemicals to remove the worst of the stains.

A district council spokesman said its enforcement team had investigated and found the business was placing its bins out for collection by its contractor properly. He added: “As such, no further action taken will be taken.”

Town centre manager Laurie-Jane Cann said: “Côte have done everything in their power to relieve a situation that is beyond their control.”

A Biffa spokesman said: "We are really sorry if we haven't achieved our usual high standards in this instance. We will be in touch with the customer to see how we can resolve this to their satisfaction.”