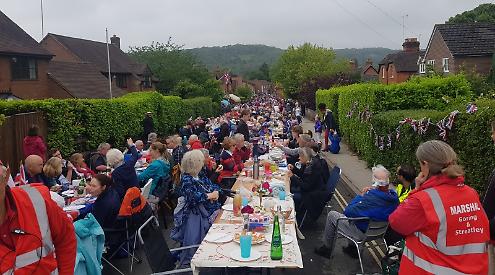 TWO world records could now belong to Goring and Streatley after they held what is believed to be the world’s longest inter-county street party.

The more esoteric record of “passing the crown” could also have been broken after a replica bejewelled hat was passed among the estimated 3,500 partygoers at Sunday’s celebration.

Compere Barrie Steele got the party started at about 1.30pm following a blessing from Goring vicar Rev Ben Phillips.

Barrie said the picnic tables measured a kilometre from end to end.

He added: “It is obviously commemorating the Queen’s 70th jubilee but it is also just showing inter-village and inter-county comradeship and friendship and fun.

“We had a street party 10 years ago and that was big. We are going again and hope to get a Guinness World Record for the longest street party spanning two counties. We are also going for the record for passing the crown. We have a facsimile crown which is in a Perspex box going all the way down and all the way back up so that everybody touches it. To get the record, it will be the number of people passing the crown.

“A lady in Goring made the crown and it is an exact replica of the imperial state crown, which is the one the Queen uses to open Parliament.”

Ron Bridle, who organised the event a decade ago and was involved in the planning ths time, said: “I’m very pleased that it is not raining.”

No one from the Guinness Book of World Records attended the event but the passing of the crown was filmed by a drone for submission to the organisation.

The four-day holiday weekend was one of the first nationwide celebrations post-covid and the sense of relief of a return to normality was palpable.

Barrie said: “There is a good atmosphere and people are enjoying themselves. You bump into old friends of course, but you also make new friends.” Attendees were fully into the spirit of the occasion with many wearing oversized patriotic hats and faux crowns.

Matt Willey, who wore a Union flag-emblazoned suit, said: “I’m looking forward to seeing friends and family amd eating and drinking. I visited my parents in Worthing on Saturday and the in-laws the day before so it has been a real family weekend.

“The jubilee is bringing everyone together after not being able to do that for a long time.”

The villages will now wait to hear if they have become the official record holders.