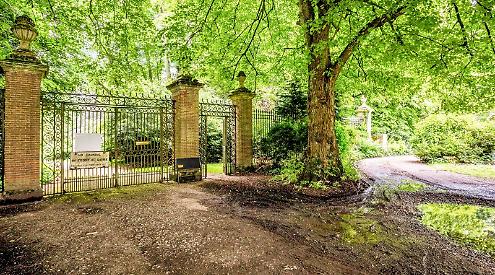 A FOOTPATH will now be opened in the grounds of the former Sue Ryder hospice in Nettlebed after a developer controversially blocked the main access point.

This was announced at a meeting of Nettlebed Parish Council on Tuesday.

Beechcroft Developments, which bought the site last year, faced criticism from walkers  after ending an agreement with the charity that allowed them to walk in the grounds of Joyce Grove.

Although there are no public rights of way across the land, permissive access had historically been provided.

The developer, which to plans to convert the former hospice into 20 flats, was required to install a footpath before the first residents moved in but has decided to do this early following the outcry.

The path. which shouold be open by the end of this month, would run from the eastern side of the village to the west, stretching from the entrance gate close to High Street to the western side of Joyce Grove near Nettlebed Creamery.

Christopher Thompson, managing director of Beechcroft Developments, said: “As a local business, based in Wallingford, we felt it would be churlish to delay the opening of the footpath, so why wait any longer?

“It will provide safe walking for pedestrians who want to avoid using the narrow footpaths in High Street and for dog walkers.

“Until the development has been constructed and occupied, the footpath will be permissive and we trust that those who use it will respect the privacy of the adjoining landowners.”

James Leach, chairman of the parish council, said he was delighted.

“I would like to thank Christopher Thompson and his team for responding to village concerns and for the speedy and generous actions to resolve them.”