No joke, my body told me I was getting older 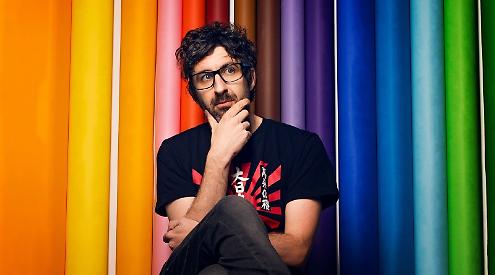 MARK WATSON is looking forward to a conventional stand-up evening when he takes to the stage at the Kenton Theatre in Henley tonight.

That’s because the comedian’s last appearances in the town were not his usual type of gig.

“I’ve played at the festival a few times, which is obviously not a representative gig,” says Watson.

“Everyone is in tuxedos for a start and you’re normally on the bill with someone like, well, I think it was Jessie J the first time I did it, so not a normal evening.”

The last time he played at the festival was in July 2018 during the World Cup and England were playing Croatia in the semi-final while he was performing.

“There was an enormous air of distraction about the whole site, including for me, to be honest,” he says.

“I stalled going on stage for as long as I could but the match went to extra time.” (England eventually lost 2-1).

In his latest show, This Can’t Be It, the 42-year-old Bristolian reflects on the time he paid £1.49 for a life expectancy app, which suggested that he was already halfway through his life.

Watson says: “As I’ve got older, I’ve started to respect my body a bit more. When I started doing stand-up I was in my twenties and I remember feeling almost invulnerable physically but those feelings do not persist into middle age.

“Your body does start saying, ‘Look, you’re getting a bit old for this’. I’ve been trying to reduce my alcohol and caffeine intakes.

“The tour was named a couple of years ago, when the pandemic had just reared its head.

“I was 40 when everything went mad so I was at a slightly transitional stage in my life anyway and then not being able to work, or see anyone, or all of those things that we all faced for months, didn’t exactly help with the feeling of dread.

“There was an awful lot of sitting around, working out what to do next. Suddenly we weren’t even allowed to have things as frivolous as fun. As someone who’s basically a full-time purveyor of fun, it was a bit of a weird thing to confront.

“I don’t need the validation of feeling that what I do is some way essential, I just think that it’s pleasant and enriches people in some way.”

However, he adds: “In the arts, we were making a lot of noise that we needed help and we were self-employed but, as important as the arts are, every other area of society was also desperate for funding with charities, food banks and people struggling.”

Two summers ago, in the early days of the pandemic, Watson and fellow comedians Ed Byrne, Shaparak Khorsandi, Ed Gamble and Zoe Lyons brought their film and comedy venture, the Carpool Comedy Club, to the Henley Showground for a “drive and dine theatre” experience.

Visitors could enjoy the show from the comfort of their own cars, while enjoying food from a menu curated by Marlow’s Michelin-starred chef Tom Kerridge.

Watson says: “So I have quite a lot of experiences of Henley audiences but they’ve all been slightly rarefied settings of one kind or another. It’ll be nice to see what an actual theatre crowd looks like. I feel like I owe Henley a good show because every time we’ve met, it has been in these strange circumstances.

“Much as I do like the festival, I think the Kenton is more my natural habitat.

“There aren’t that many venues now that are new to me on tour, so there’s an extra thrill when it’s an unfamiliar theatre but especially a slightly grand theatre or one that’s slightly run down by time. I do have a soft spot for those venues.”

In any case, Watson is familiar with the town anyway.

“I have spent a bit of time in Henley as we’ve got friends there,” he says. “It’s quite an eccentric place really — I mean that as a compliment.”