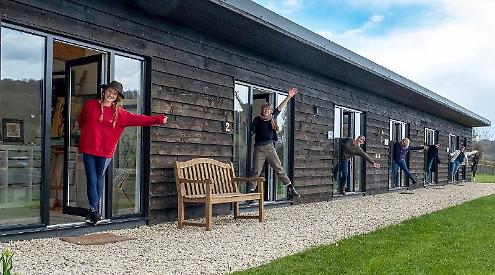 SIX artists are inviting visitors to their studios in a beautiful, secluded spot in the Chilterns.

Turville Studios are near Cobstone Windmill, which featured in the 1967 film Chitty Chitty Bang Bang. They were completed in 2019 after artist Sophie Fois convinced her parents to convert some old barns into six units for renting out.

Now Sophie, a painter, has one while the others are used by Marie Robinson, Suzy Tonkinson, Beverley Matchette-Downes, Rachel Wallace and Jenny Zolkwer.

Although they work across a range of media, one of the first things the women did was to each create an artwork based on the windmill.

Sophie, 29, went to Gillotts School and The Henley College and completed a foundation art diploma at Oxford Brookes before graduating with a decorative arts degree from Nottingham Trent University in 2015.

She does commissions in pet portraiture and has a two-year waiting list. She also creates her own pieces and, having grown up with horses, a lot of these are horse paintings.

Sophie, who lives near Turville, says: “I have my own horse, Buttons, who’s pretty much opposite the studio, so he’s a great muse.”

She works from photographs or by meeting the animals in the flesh.

“For me, the real passion is in movement in animals, capturing the essence through colour,” says Sophie. “I pick the best look that represents the character of the animal. I make a realistic portrayal and I have my own little style where I enhance the colours and contrast slightly.”

Sophie has painted creatures as varied as pangolins and hyenas and even some African elephants from her travels. She says: “I went on my honeymoon recently and my husband was like, ‘You’re not doing any work’, so I took my camera out — I got away with that one.”

Marie and Beverley heard about the studio on the grapevine when their old premises, Commercial Square Studios in High Wycombe, closed for redevelopment in 2018.

Marie, 60, a painter from Benson, took a part-time fine art degree in Banbury alongside a part-time job when her children were growing up.

She is currently working on a series of little paintings, called 60 at 60, and says: “It’s never too late.”

Beverley, 61, a printmaker from Marlow, does stone and plate lithography, etching and collagraphs, having completed a master’s degree in printmaking at Buckinghamshire New University.

She says: “It’s beautiful here and we’ve just been shortlisted in the Muddy Stilettos awards for the best art space in Bucks and Oxon.”

Beverley herself has just been shortlisted for the Society of Women Artists.

She says she came to pottery later in life, explaining: “I said ‘yes’ to everything that Henley has to offer. I did Bollywood, I did Spanish lessons and I did hula-hoop classes.

“The first time I sat on a wheel, I absolutely got it. Potting is absolutely wonderful. It’s the most exciting medium and I’m completely convinced by it. It gives me immense pleasure when someone holds something to their heart and says, ‘Can I buy this?’ That’s lovely.

“I make cereal bowls with lips on so people can drink the milk from them.” Jenny also gives pottery lessons and recently gave up working in special education.

She says: “It is an absolute privilege to be able to afford a studio rather than converting the shed or using your spare room.”

Suzy took up art after working in the City for 28 years. When her son Max started secondary school, she signed up for the Buckinghamshire Open University foundation course in art, design and media, which she completed in 2018.

“I seem to have found my little niche now,” she says. “I focus on portraits, figures and sometimes champagne. I’m still learning and experimenting. It’s so nice to be able to go down to the studios and create art. It’s pretty amazing, just a lovely thing to be able to do.”

Rachel, a fine art photographer from Fingest, achieved a postgraduate certificate in photography from Central Saint Martins in 2010 and a master’s degree from the University of Westminster in 2018.

“My work is all about nature, the environment, sustainability, biodiversity and ecology,” she says. “I cycle to the studio where possible and have an electric car.”

She says: “People in art photography are moving away from just straight photographs and doing things. I’m stitching and sewing on my photographs and painting on them, adding gold leaf so it makes them a little bit more physical and each one becomes unique.”

Suzy, a painter, heard about the studios from Rachel, her neighbour. She says: “It’s a lovely little unit and everyone gets on.”

• Artists at Turville Studios (opposite the garden of the Bull & Butcher pub) takes place on Saturday and Sunday from 11am to 5pm daily. For more information, visit www.turvillestudios.co.uk