Traders unhappy at speed of roadworks 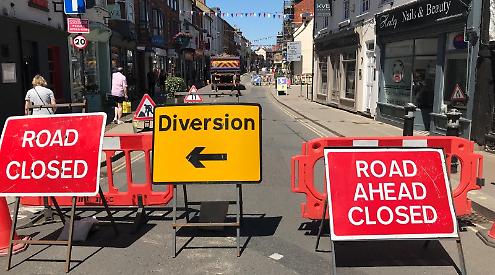 TRADERS in Henley have called for roadworks to be finished more quickly after Duke Street was closed for several days due to a gas leak.

The emergency closure from Saturday to Wednesday morning caused rush- hour gridlock throughout the town and left traders counting the cost of lower footfall.

Utility firm SGN shut Duke Street on Saturday to dig up the road after a report of a gas leak. The work was not completed until Tuesday night.

Business owners said they understood the reason for the closure but questioned the sense of urgency in completing the work. Bea Pearson, who runs eco gift shop Wild and Rust in Duke Street, said: “There were times when no work was being done and you wonder if the road had to be closed completely. It’s a bit different when an emergency turns into several days.

“It certainly affected footfall and it was much quieter than usual. We certainly saw a drop over the weekend.”

Ms Pearson said she had been expecting products for Fathers’ Day that could not be delivered and two customers coming to collect orders simply gave up after being stuck in the traffic coming into town.

She said: “It would have been useful if there was better communication, if someone had popped round and told us what they were doing.

“If we’d had a better idea of what was going on I might have been able to reschedule deliveries and the collection of orders.”

Laurence Morris, who runs Laurence Menswear in Duke Street, said: “It’s an emergency gas leak and you can’t predict how long it’s going to take to find the leak and fix it.

Eva Rickett, who owns Henley Scan in Reading Road with her husband Graham, said: “We totally understand that it was an emergency but it’s a fact that no one did any work after the road was closed on Saturday, so you have to ask if there should not have been more urgency to get the work done.”

The couple live in King’s Road, the main route for traffic diverted by the road closure.

Mrs Rickett said: “The traffic has been horrible. It was clear that drivers were getting very frustrated.”

The impact of the road closure was felt throughout Henley with roads across the town gridlocked as a result of the diversions.

Joan Bland, who runs Asquiths Teddy Bear Shop in New Street, said: “There has been a constant traffic jam in New Street every day from very early in the morning and it’s very difficult to cross the road.

“It’s very difficult for pedestrians and the car drivers seem to be very impatient. The traffic is all day long and it’s polluting. The last thing we need in the town centre is poor air quality.”

“Thankfully, they came straight out to carry out the work and we are very relieved it did not become more serious than that.

“It would definitely have had some impact. We are very aware that Henley is a medieval crossroads with a one-way system.

“When it’s an emergency we do not have the opportunity to get the communication out in time.

“There was some disruption but it was unavoidable. These were exceptional circumstances.”

An SGN spokesman said Duke Street had been closed for safety reasons while the emergency gas network repairs were carried out.