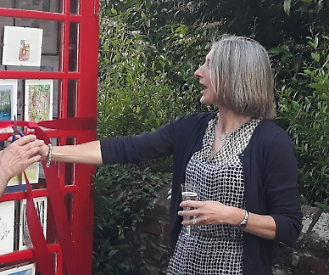 THE old telephone box in Rotherfield Greys has been restored after four years.

Residents and businesses contributed towards the cost of refurbishing the red kiosk, which BT sold to Rotherfield Greys Parish Council for a nominal sum of £1 in 2017.

The box, which is a listed building, was in a poor state of repair and could only make calls to numbers in the village.

But on Friday it was opened as a mini art gallery and information centre to signpost people to places in the village and surrounding area.

Nicola Whittle, who chaired the restoration committee, cut the ribbon.

She then thanked the small group of villagers present, including committee members Claire Howlett and Rosie Clinkard and Jayne Price, who was parish clerk when the box was adopted. She also thanked committee member Emma Turner, who has moved to Devon.

Brian Sills, the father of Ben Sills, who is the new tenant of the Maltsters Arms pub in the village, was also there with a bottle of Prosecco to toast the occasion.

Mrs Whittle said: “The restoration of the telephone box has been a labour of love, taking nearly four years to complete. We have battled through the covid years and everything the weather could throw at us, raised money, scraped and painted, replaced broken glass and frames and gathered postcard-sized art to display in the box.

“Emma was at the ceremony in spirit and her children have produced some of the art for the box.”

The committee first met in spring 2018 and began raising money for materials. including paint and glass as well as tools. There was also a “jar at the bar” collection at the pub.

While work was waiting to begin, the box was wrapped in plastic and taped shut to protect it.

Then, at Christmas, it was wrapped in tinsel and a bow tied round it to make it a festive feature.   Mrs Whittle said: “Progress on the restoration has been slow as the committee all have busy lives and the work involved an awful lot of scraping by hand to remove many layers of red paint.

“The weather — boiling hot summers and wet winters — and covid-19 didn’t help either but the restoration was finally finished in the spring.

“Lots of people walk past the box every day and when it was being painted they said how pleased they were that it was being refurbished. It now looks amazing. I’ve had lots of emails saying that it looks great.

“One thing everybody asked is whether or not it was going to be a book exchange but we thought that pretty much every old call box in the area has been turned into one of those and we wanted something different.

“However, the telephone box is in quite a dangerous position on the edge of the road through the village so it was decided that it would be safer not to use it in a way that would attract large groups of people.

“We produced an information leaflet and decided to display artwork instead. There are about 24 pictures, which include photographs, old and new, taken around the village.”

The telephone box is a K6 model and was designed for the General Post Office by architect Giles Gilbert Scott in 1935.

He had been commissioned to design a simpler and cheaper model than the earlier K1 to K5 boxes and he introduced more glazing, which improved the lighting.

The boxes also had a cast-perforated crown, although this one has a fuller Tudor crown.