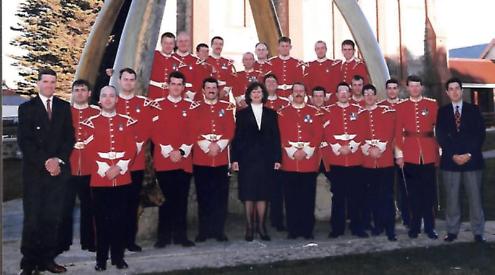 A SINGER is to perform for the last time and raise money for Ukrainian soldiers on the front line in the war with Russia.

Margaret Fish, a mezzo-soprano who performs as Margaret Probyn, says that at the age of 72 she has lost quality in her voice and after a cancer diagnosis, she thought it best to do the concert “sooner rather than later”.

She will perform at All Saints’ Church in Dunsden tomorrow (Saturday) accompanied by organist Helen Lam, who is music director and organist at Shiplake College and teaches piano, flute, singing and music theory.

Mrs Fish, who lives in Sonning Common, said: “In some ways it’s a sad occasion saying goodbye to singing and I’ve had to change the key of some songs because I can’t reach the notes and there are some songs I would have wanted to sing but can’t.

“It’s bittersweet because it’s also about just having fun. I hope the audience will enjoy it.”

Mrs Fish was a singing teacher at Henley Music School until she was diagnosed with blood cancer in March 2020, just before the first coronavirus lockdown. She continued to give classes online but when face-to-face teaching returned she was advised not to resume these because of her low immune system.

She had chemotherapy after her diagnosis and began another round last week.

Mrs Fish said: “I am getting wonderful treatment from the cancer team at the Royal Berkshire Hospital in Reading.

“I was really shocked to hear I had cancer as the problems I had seemed to be orthopaedic and apparently an unconnected all-over itch. More needs to be done to help understanding and knowledge of blood cancer.”

Mrs Fish began her career as a singer after graduating from the London School of Music, where she was taught by Professor William Lloyd Webber, father of composer Andrew Lloyd Webber and virtuoso cellist Julian Lloyd Webber.

She has sung opera ranging from Mozart and Humperdinck to Benjamin Britten and Giancarlo Menotti. She was also involved in some of the great musicals as well as popular song, lieder and folk songs.

One of her most treasured memories is of singing with the King’s Division Normandy Band in the Falkland Islands in 1997.

She gave six performances, including one in front of the islands’ governor.

“The whole visit was memorable in so many ways,” she said. “I was amazed at how strongly the Falklanders’ emotions were towards their British heritage.”

She began teaching more than 30 years ago when her next-door neighbour begged her to give singing lessons to her 14-year-old child while she looked after Mrs Fish’s newborn son.

From this point, she fell in love with teaching and she was in great demand in Buckinghamshire where she then lived and she taught at Princes Risborough School.

She began teaching at Henley Music School when she moved to South Oxfordshire.

She has sung at the Kenton Theatre in Henley and also spent some time performing with the Berkshire Maestros. She met her second husband, Adrian Fish, in the late 2000s through a mutual friend who introduced them. He is a composer and graduate of the Royal College of Music. He is also a pianist and organist but can no longer play due to arthritis in his fingers.

In April she raised £450 for Blood Cancer UK by completing the Walk of Light at night.

Mrs Fish said that although tomorrow night would be her farewell concert, she hoped to do one more in October in order to perform some of her husband works.

She will be singing a medley of songs that she has enjoyed singing over the years and which have personal resonance for her. She will also tell stories from her life in music.

Songs will include O Peaceful England, Mad About the Boy, Habanera and Liverpool Lullaby.

The concert, called Margaret’s Medley of Melody, will begin at 7pm. Entry is free.

Donations will go to a Henley crowdfunding group to get medical supplies and Land Rovers to Ukrainian soldiers. To make a donation, visit https://bit.ly/3tPJVBZ