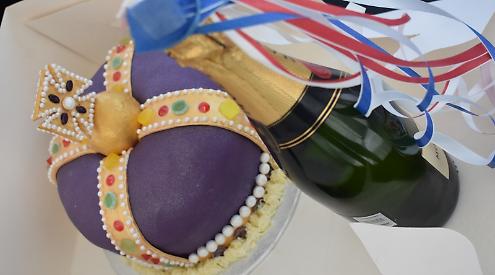 THE celebrations in Henley for the Queen’s platinum jubilee have been called “flat”.

The comment was made Philippa Ratcliffe, who runs Experience Henley, at a meeting of the town council’s events sub-committee on Monday.

She said she didn’t think enough was done to encourage residents to come into the town centre.

The council had organised the lighting of a beacon at Makins recreation ground on the bank holiday Thursday and music in the town centre and at Mill Meadows on Saturday and Sunday.

Mayor Michelle Thomas helped judge a shop window competition for retailers on the Friday while residents were encouraged to have a picnic on Mill Meadows on the Sunday.

Ms Ratcliffe thought more effort should have been made.

She said: “I was a little bit disappointed that we didn’t have the flagpoles in Market Place with Union flags or the front of the town hall with a bit of bunting.

“I work a lot with the hospitality venues in town and I was sitting outside on the Saturday having a glass of wine in the sunshine and one of them said they had had people coming to visit and asking what was going and in the market place but there was nothing.

“I know lots of people were doing other stuff but it would have been nice for there to be more of a nod [to the occasion]. We shouldn’t be disappointed with feedback but, for me, it just felt flat.”

Councillor Sarah Miller, who chaired the meeting, said budget restraints meant the council couldn’t do more, which she said was “a shame” but on the whole it was a “fine weekend”.

She added: “I was disappointed for the picnic on the Sunday as the weather wasn’t great but I didn’t see any promotion at all — even fellow councillors didn’t know. There wasn’t anything happening on the Sunday. It wasn’t fantastic but it was okay.”

Deputy Mayor Donna Crook said the town was very quiet on the Sunday but this would have been largely down to residents having their own street parties.

But Ms Ratcliffe replied: “If there was something there, people would have come.”

Mayor Michelle Thomas said many families had gone away for the jubilee weekend as it was one of the first opportunities to do so since the coronavirus pandemic.

She said: “The Thursday evening and the lighting of the beacon was absolutely fantastic. On the Saturday I was representing Henley at Oxford. People talk about our lack of decorations — Oxford was even worse!

“I don’t like a lot of bling around the town, it is a special town centre with listed buildings and they should be the focus and a lot of people don’t like it.

“Moving on to the Sunday, it was a miserable day in terms of the weather and a lot of people didn’t turn up to street parties that were organised because of it so don’t beat yourselves up about it.”

Cllr Miller replied: “I would have saturated the town with bunting and bling.”