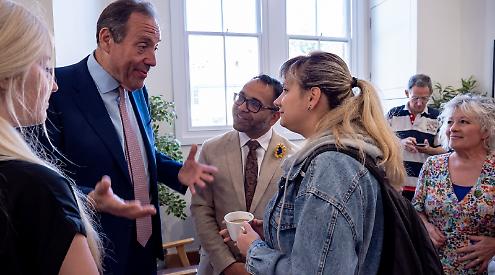 THE minister for refugees attended a coffee morning for Ukrainian refugees in Henley.

Richard Harrington spoke to a group of about 15 families who are being hosted in and around the Henley area.

The Ukrainians, who had gathered at the d:two centre in Market Place on Tuesday, had all come to Britain through the Homes for Ukraine scheme, which the minister is responsible for.

The coffee morning is a weekly event which is run by Henley resident Dr Krish Kandiah, chief executive of the Sanctuary Foundation.

The minister gave a short speech and then spoke with the families about their experiences of the scheme and listened to any feedback.

Lord Harrington said he had been moved by what he had heard.

He said: “It was a pleasure meeting the group of refugees and it was quite emotional listening to the experiences some of them have had.

“Nearly all of them spoke about how well they got on with their hosts. Many of them have gotten jobs as well, which is
brilliant.

“Some of the negatives were that some felt it had taken too long to get their visas, which is an issue that has been publicised and rightly so.

“We have automated the process now and it only takes 48 to 72 hours.

“They also expressed their concerns about the cost of bus travel. They didn’t come straight out with these concerns, I had to get it out of them.

“The scheme typifies what is great about this country. Most people were frustrated watching the news. Some gave money, others donated clothes, but for people to take refugees into their homes on such a large scale is incredible.

“Being able to see it for yourself rather than just talking about it from Whitehall is vital.

“Something like these coffee mornings are so important as it provides a shared experience for refugees and host families. They can discuss their different experiences and give advice you couldn’t access on a government website.”

Applications for the Homes for Ukraine scheme began on March 18 and since then, more than 70,000 Ukrainian refugees have arrived in the UK, although some arrived under the separate family scheme.

Anfisa Vlasova who has been taken in with her four Yorkshire terriers by a couple in Gallowstree Common spoke to the minister at the coffee morning.

Ms Vlasova, 40, said: “It was quite crowded because so many people had come to see the minister give his speech.

“I had a really good time. This was my third time at the coffee morning, which allows me to talk to newly arrived Ukrainians. I can give advice to those who feel a little lost.

“He said in his speech about how 70,000 people have come over. I think the scheme has been very successful, especially when you see all the hosts who are there.

“The only concerns seemed to be about bus tickets. Many of us don’t have a car and it takes too long to get anywhere on a bicycle. The only place you can get free tickets as a refugee is in Reading. Otherwise, you are always having to ask someone for a lift.”

Dr Kandiah said: “I thought the visit went really well. The minister was very affable and personable and really listened to the refugees who had gathered.

“Him coming was a real endorsement. He was able to see the practical realities of what is happening with the scheme.

“These coffee mornings give an opportunity for refugees and hosts to come together. There were refugees who live in the same village who didn’t know about each other but now do.”