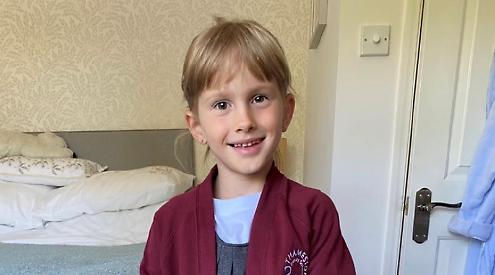 A WOMAN who fled Ukraine with her mother and daughter is now living in Sonning Common.

Anna Ovchynnikova, 33, left her home in Kyiv with her daughter Kseniia, six, after hearing rockets falling on the city following the Russian invasion.

They travelled to her parents’ house near Vyshhorod, a city closer to the Russian border, where they stayed for a week.

When the Ukrainian military began to implode bridges near the city to halt the advancing Russian troops, Ms Ovchynnikova fled with her daughter and mother Nataliia, 62, to avoid being trapped.

They were able to leave across the last remaining bridge and drove to Romania. From there, they travelled through Hungary and Austria into Germany, where they stayed for two months. Ms Ovchynnikova said: “We went to western Germany as it was less overloaded and there was a chance to find somewhere to stay as we didn’t know how long we would be there.

“We were quite lucky because we found a place to stay at a social property. We were lucky to avoid a refugee camp.

“There was no Homes for Ukraine scheme at that point but I wanted to get to the UK as I had visited there before and I spoke the language.”

Before the war, Ms Ovchynnikova had worked for a British IT start-up company and had visited the UK more than 20 times.

She worked on projects in London, Newcastle and Edinburgh and on one of these she worked with Andrew Saoulis, who lives with his wife Kathy in Sonning Common.

The former colleagues got in contact following the Russian invasion and they were able to arrange for Ms Ovchynnikova and her family to come to the UK.

The family arrived at the start of May and are living with Mr and Mrs Saoulis at their house in Grove Road.

Ms Ovchynnikova said: “It has been perfect so far. I hope it is not difficult for Kathy and Andy as they have been very kind to us and they are trying to create a community here for Ukrainians.

“Kathy didn’t know us at all and I know it is very difficult to have strangers living in your home.”

Mrs Saoulis said: “I had never met Anna but I had heard about her. Andrew has worked in Ukraine for many years and got to know lovely people such as Anna.

“When this awful war started, it was breaking our hearts to watch the news. At that point we asked Anna to please come and stay with us.

“It is really lovely to be able to have her and her family here to stay. They are a lovely family and they fitted in so well as soon as they arrived. The little one is very shy but is adorable.

“When we knew that Anna and her family were coming, I came across this lovely group run by Rachel. I gave her a call and she invited me along to a meeting.

“It was just people from Gallowstree Common and Kidmore End at that point, so I gate-crashed that meeting. I didn’t know of anyone else at that time doing this.

“When I met them, they were all so lovely and kind. There were those who could host and those who would love to but weren’t able to.

“After I left that meeting, I thought that everyone was doing different things and I wanted to do more to help. That’s when I had the idea for a sale.”

Mrs Saoulis held a sale of clothes, toys and books donated by members of the group, as well as a tombola, raffle and cake stalls.

“Rails of clothes, children’s toys and books. It was so much that my neighbour Shelly offered to put a lot of the stuff on her driveway.

It just kept growing and I couldn’t turn anybody down. When Anna arrived, there was no room in the lounge.

“It’s been absolutely amazing. We’ve got this lovely group and they really are amazing.”

Ms Ovchynnikova will resume working for the IT company later this month, while Kseniia has begun attending Thameside Primary School in Caversham.

Her father Viacheslav is in Germany still waiting to come over and her husband Oleksandr has remained in Ukraine to help with humanitarian aid.