Father and son going into business together at pub 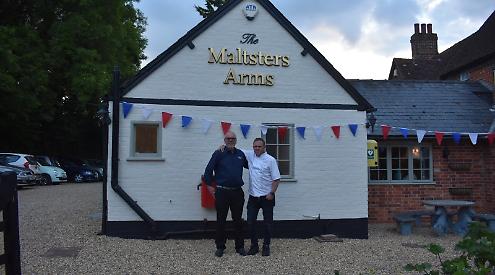 THE pub in Rotherfield Greys has re-opened with new landlords.

The Maltsters Arms, which is owned by Brakspear, is now being run by Ben Sills, 39, and his father Brian, 67.

The Greys Road pub has been refurbished, having been closed since the previous tenants left in January.

Mr Sills jnr was previously head chef at the Crooked Billet in
Wokingham.

He said: “When we came to see it we just knew. We came in and we smiled and as we went round, the smiles just got bigger and bigger.”

Mr Sills snr said: “It’s like when you’re choosing a new school for your child or a new home — you know it’s the one.”

At the moment, the pub is open for limited hours due to a lack of bar and kitchen staff.

Mr Sills jnr said: “We want to be open all day, seven days a week, and be here for the community but we want to do it properly and that requires more people working.”

Mr Sills snr said: “We could have put banners up saying we’re open but we didn’t want to be swamped and have people think we can’t do our jobs properly. You’ve only got one chance to make a first impression and we want to make it a good one.

“The reaction from villagers has been amazing — they’re delighted to see the pub open again.

“It’s also in a great location for people on their way to Henley so we get lots of dog walkers and cyclists coming in. We also get community group meetings here.”

The committee which organises the Greys village fete in September has chosen to meet at the pub and might ask the Sills to provide food at the event, as the pub has done this previously. The pub also hosted the village’s recent celebrations of the Queen’s platinum jubilee celebrations.

Mr Sills jnr said: “It’s fantastic to be open but also overwhelming. There’s so much to think about.

“You think you have it all sorted and planned but then there are so many small things that you forget like tongs for ice and trays for the bills.”

He said they wanted the Malsters Arms to be a “proper English pub with a decent bar and proper pub grub”. Mr Sills jnr grew up in Basingstoke with his parents and is the father of two girls who live in Spain with their mother.

His father was part owner and commercial director of a pharmaceutical supplies company and then became a groundsman and gardener for the co-owner of a classic car company.

His wife, Lynn, died 20 years ago after an asthma attack.

Her parents were landlords of the Lime Kiln pub in Breedon on the Hill in Leicestershire, where Mr Sills snr worked whenever he was back home from the navy, which is how he met his wife. He said she would be very proud of them.

His grandfather owned the Hastings Arms in the same village.

Photographs of both pubs have been put up at the Maltsters Arms. One shows Mr Sills snr’s father standing in front of the Hastings Arms as a boy.

They took over from George Thomas and Calum Miller, who had been behind the bar since September 2015.

The pub was previously run for 17 years by Peter and Helen Bland, who moved to Torquay to start a bed and breakfast business.