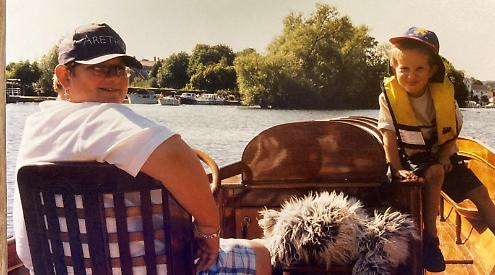 THREE members of the same family will be driving boats at Henley Royal Regatta next week.

Dilly Bil, who became the first woman to drive an umpire’s launch in 2003, will be joined by her husband Steve and their son Charlie, 23, who will ferry regatta chairman Sir Steve Redgrave about for the second year running as well as being a relief driver for the other launches.

“It’s lovely for us,” said Mrs Bil, 60. “My husband and I said to each other that we couldn’t retire until Charlie was driving with us as well.

“We were really delighted last year when he was called up. Charlie has been driving since he was eight — he has been on kayaks since he was a baby and now he has his own boat. He can’t think of anything other than working on the river and we didn’t give him much of a choice to get away from it!”

Charlie and his parents worked at Henley Women’s Regatta last week, which was the first time they had driven alongside each other for the entire duration of a regatta.

Charlie, who has also driven at the Henley Town and Visitors’ Regatta, said his parents had always encouraged him.

“When I did something good it was so great to see them smiling and get their approval,” he said. He is a kayaking instructor and also transports boats for their boatbuilding company.

In 2019 he worked for Cook’s setting up and taking down the regatta course, having done work experience with the company the previous year for the Thames Traditional Boat Festival.

Mrs Bil has remained the only female to drive a launch at the royal but there have been other changes for women.

In 2016 Sarah Winckless became the first female umpire and last year it was announced that female spectators can now wear trousers rather than only long dresses and this year there is an equal number of events for men and women.

Mrs Bil said: “I don’t know why I’m still the only one after all these years but it has been great to see women starting to get recognised in other ways.

“It’s also important that it didn’t detract from the women’s regatta because there was a lot of worry that might happen but that has not been the case at all.

“It’s quite nice from our point of view as umpire launch drivers to see crews at the women’s regatta and then see them again at the royal – it’s fantastic watching these people develop over the years.

“The regatta is now so much more inclusive. I remember when I first started, I was checking a notice board for times and two old duffers were there with their hats and blazers and said, ‘Good God, that man’s a woman’. I found that hilarious! All the things that made it so interesting in the past are still there but they have just sort of polished it up and made it a bit better.

“The trousers thing is a great idea as boating is not conducive for skirts. The ladies have such a problem because they have to trap their skirts between their knees. There’s nothing worse.”

Mrs Bil grew up in Whitchurch and moved to Pangbourne 25 years ago with her husband, who is 73 and a marine engineer.

She lived on a farm by a mooring and friends of Mr Bil would joke that he only went out with her to see the boats. She went to The Henley College and was a teacher before buying a company with her husband in 2020.

The couple bought Stanley & Thomas Boatbuilders in Windsor with the money from the sale of the farm after Mrs Bil’s parents died. It had always been Mr Bil’s dream to own a boatyard.

The couple’s journey to the royal regatta started in 1987 when Mr Bil took on an abandoned Arethusa boat after it broke down. Part of taking on the responsibility was to make it available as an umpire’s launch at the regatta.

Two years later, he was put on a 50ft launch and Mrs Bil drove the Arethusa boat for corporate launches. As Mrs Bil knew the course well, she was called in to drive the umpire launches in 2002 after a boat broke down.