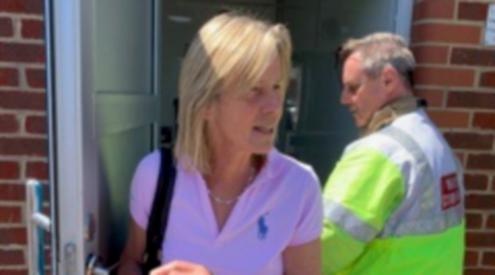 A WOMAN had to be freed by firemen after getting stuck in a public lavatory in Henley.

Janette Verrall, 63, was unable to exit the toilets in the Greys Road car park for more than 40 minutes after the lock on her cubicle jammed.

The incident, which happened on Tuesday last week, followed a £145,000 refurbishment of the toilets by South Oxfordshire District Council and the official unveiling only four days beforehand.

Ms Verrall, who lives in Russell’s Water, was in Henley to pick up her tennis racket, which was being restrung at Henley Sports, as she planned to play with three friends at Shiplake Tennis Club later that day.

She parked in the car park and decided to use the toilets before collecting her racket.

Ms Verrall said: “I had just put the ticket in my windscreen when I saw a woman walking into the toilets, which looked lovely and new. I was aware they had been refurbished and I needed the loo, so I decided to follow her in.” After using the facilities, Ms Verrall was surprised to find the cubicle door wouldn’t open.

She tried for three minutes to open the door and rang her friend for help before pressing a buzzer located in the toilets to sound the alarm.

She said: “Luckily, a lovely man called Ricky was walking past at the time and heard the alarm. He was trying to speak to me but I couldn’t hear him as the alarm was so loud and the door was so thick.

“He said to turn the buzzer off, which I did. He then called the police but they said they couldn’t do anything.

“He had the idea to call the fire brigade as they are only up the road. He talked to me while we were waiting. Even when the firemen came, he didn’t leave.”

Ms Verrall said: “I could hear lots of hammering and they said to stay away from the door as I think they were worried it would fall on me.

“I was totally unfazed, though. I don’t panic easily. I’m just glad it wasn’t someone elderly or a child stuck in there.”

After being freed, Ms Verrall was even able to make it in time for her tennis game.

Despite the ordeal, she said she would use the toilets again. She said: “I think it’s so sad that they spent so much money on it and that this happened after just a few days.

“I couldn’t have been stuck in a nicer toilet. It was very smart and clean and I would definitely use them again.”

The refurbishment created two separate unisex lavatories, and a “Space to Change” facility.