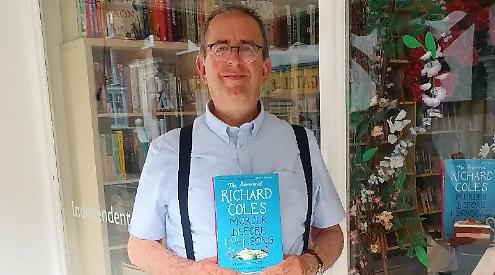 A HENLEY bookshop had a flying visit from an author, broadcaster and former parish priest.

He signed 40 copies of the book while sitting in the window of the store in Bell Street on Wednesday last week and more than half of those have since been sold.

He was on a tour of bookshops and travelling with a representative from his publishing company, Hachette.

He told the staff that he loved Henley and knew it well as he has relatives here.

Emma Downes, co-manager of the shop, said: “We were honoured to have him and he lifted our spirits.

“He was delightful even though he must have been exhausted by visiting so many bookshops in the extreme heat.

“He was very complimentary about the shop and was delighted with the window display dedicated to his book.

“He especially liked the teapot with ‘More tea, vicar’ on it and the toy dachshund, with the compliments of Asquiths, which was useful as he was tweeting #BookshopDogs. Rev Coles is a former Church of England priest who co-presents Saturday Live on Radio 4.

He is a regular contributor to television and radio and is a best-selling author. He wrote The Madness of Grief, Fathomless Riches and Bringing in the Sheaves.