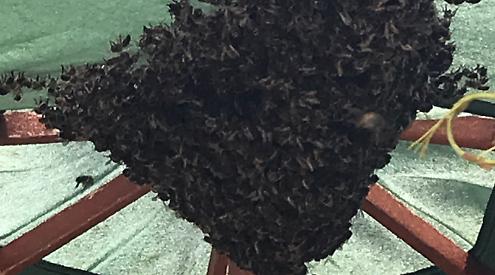 THERE was quite a buzz around Henley last week with two giant swarms of bees appearing in the town centre.

The first was outside St Mary’s Church in Hart Street on the corner where the footpath runs past the building.

Rev Jeremy Tayler, the rector, said this happened at the same time in the same place every year and his wife called a local beekeeper who came to collect them.

The following day, another swarm arrived in the back garden of the Hot Gossip coffee house in Reading Road, causing a bit of a stir.

Proprietor Lorraine Hillier was alerted by a customer in the garden. She said: “I had been working in the shop all morning, going in and out of the garden, and I didn’t notice anything untoward.

“Then I went out on a sandwich delivery and by the time I came back at about noon, it had all changed.

“David, one of my regular customers, who was working in the garden on his laptop, told me there was this giant swarm of bees.

“I went into the garden and the drone coming from them was unbelievable.

“There was David and also a couple who said they had seen what looked like a dark cloud come across the sky and into the garden.

“The bees came together and congregated underneath a parasol. I don’t know what they thought they were doing but it was quite a hot day so I guess they went to get some shade.

“It was David who told me to contact Richard Guy, who normally just comes in for a cheese toastie and a coffee — I had no idea that he does bees as well.

“I gave him a ring and he was in Fawley but popped round a couple of hours later and tried to get the bees to go into a box by first putting the queen in there.

“Richard then left but came back at dusk when he sprayed the stragglers with water to make them think that it was raining and this coaxed them into the box.

“We still had people in the garden in the afternoon. We had to tell them when they came in not to worry but there was a swarm in the garden and they went out there and were mesmerised by the bees.

“They were really good — the bees and the customers. Nobody got stung.

“The bees were not interested in anybody else or the food and drink that was there but it was quite something to watch.

“I took a couple of videos, which I suppose you could call a B movie.”

Lorraine, who is a town councillor, added: “Richard knows people with beehives so he got all the bees together, all alive, and they have now gone to a good home so none were harmed.”