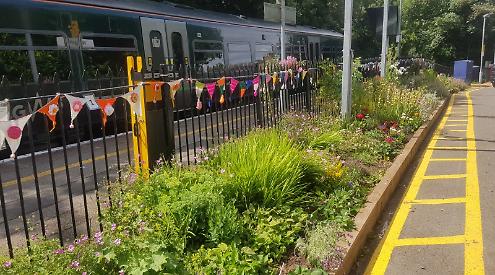 THERESA MAY admired the makeover of Wargrave station as part of the village festival’s open gardens events on Sunday.

The improvements include a new shelter, which was installed last month with lighting and seating, and two display boards inside which depict the history of the station and events going on in Wargrave.

An automated ticket machine and two swipe card readers have also been installed. A bicycle rack is due to be in place soon oo

The station has also been given a sprinkling of colour with planters, hanging baskets and a flower bed.

Members of the Wargrave User Group, known as “Wuggers”, and 15 families who each tend a 2m plot of land between the car park and the platform, offered Sunday’s visitors tea and cakes.

WUG chairman Edward Marshall said: “GWR have kindly funded most of the improvements which WUG pressed for but we have also benefited from two grants from Wargrave Parish Council and two generous personal donations.

“There are a lot of shelters that are not nearly as smart and are much more open to the elements, so we are very pleased with this.”

Philip Meadowcroft, a member of the group, said the station had looked “a bit drab”.

He said: “We had an old tin shelter that was horrible and low level benches which we have now replaced with new ones and this smashing Georgian-style shelter that is lit at night.

“We have planters out the front. It really looks quite good.”

The group was formed eight years ago when the station’s rail services were under threat.

Mr Meadowcroft said: “That was when we were trying to protect it from basically being downgraded because there was a plan to have 30-minute services on the Henley branch line and GWR said the only way to achieve that was by skipping Wargrave on every other service. We said, ‘Over our dead bodies’.

“I sat out here on one November day from dawn until midnight logging every train and how long it took and we found it took 12 minutes. It had to virtually go to the UN for approval for the adjustment of the timetable.”

After securing the operational side of the station, the group turned its attention to the appearance.

Mr Meadowcroft said members of the group made “a bloody nuisance of ourselves”, adding: “The only way to shut us up was to give us the money.”

WUG installed and now maintain seven double box planters along the platform railings and cultivated the 95ft long verge in the car park parallel with the platform.

The planters are re-stocked three times a year for spring, summer and autumn.

This work has been voluntarily managed by Judi Rowlands, Chris Bennett and Sara Beazley.

Mrs May, the MP for Maidenhead and former prime minister, has supported the group.

She said: “I have always enjoyed constituency issues so it is nice to be back on the back benches and come along to things like this. I think the transformation is wonderful but it is only with the persistence of local people that it has got to look better. The gardens look wonderful and those who tend them should be applauded.”

Katie Bennet, who has lived in the village for 11 years, said: “Not only does it look lovely, it smells wonderful. You don’t normally get that at a station. It’s beautiful, really nice.”

WUG has now turned its attention to another long-running issue — Great Western Railway trains on the Saturday of Henley Royal Regatta not stopping at Wargrave.

Mr Marshall said: “We are adamant that one day we will get the train to stop at this station on a regatta Saturday. Of all the stations, we are so close to Henley.

“They refuse to stop the train because they say it has to fit the station. The reality is the trains do fit the platform and, as with the London Underground, where the train doesn’t fit, they stick out into the tunnel but the passenger doors line up. It is persuading the railways to change the rules.”

Membership of WUG is free and about 70 Wargrave households are members.