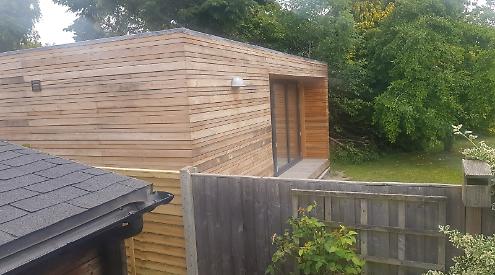 AN elderly man is frustrated that nothing is to be done about his neighbour’s oversized garden office even though it is in breach of planning regulations.

Ian Adams, 88, of Whitehouse Road, Woodcote, says the view of his garden has been blighted by the timber building next door.

The 88-year-old widower complained to South Oxfordshire District Council, the planning authority, which confirmed it was “unauthorised development” but has refused to even carry out a site visit.

This follows a decision earlier this year by the council to change it rules for enforcing planning breaches due to a shortage of staff.

Mr Adams, a retired publisher who lost his wife Marianne in 2020, says the problem began in August when neighbour Stuart Walker approached him about his plans to erect the building close to their joint boundary.

He said: “He’s a nice enough bloke and he said he would like to build a garden office and ‘I want to put it behind your log cabin’.

“I said there was not much I could say as long as it complied with planning regulations. In October they started to erect the thing and I noticed it was quite large so I immediately got on to planning.

“I told them what was happening and that it was in the very early stages and if they got here in time they might save him some problems if he had to take the thing down.

“I expected them to turn up the next week but that didn’t happen.”

Mr Adams said the council’s planning officers didn’t seem keen to intervene but he persisted and they eventually agreed to allocate a case number.

However, still nothing happened and the building was erected. It is about 3m tall, 4m wide.

Mr Adams said that after months without any action by the council he hired surveyor Suzanne M Scott to help him.

She investigated and wrote to the council saying the building was within the Chilterns Area of Outstanding Natural Beauty and was too big to be covered by permitted development rights which allow for building without planning permission in certain cases.

She said: “Within an AONB, permitted development rights are restricted so that a footprint of no more than 10m sq is permitted if further than 20m from an original wall of the house.

“In short, a garden outbuilding in this location so close to two neighbours’ boundaries is not lawful under permitted development rights and should have been the subject of a planning application.

“The back garden is a very special part of my client’s home, which he tries to maintain to his late wife’s high standards.

“It gives him great pleasure to look out of both the kitchen and sitting room windows at the garden he keeps going in her memory. That view is now blighted by the overly large and overly close garden office.”

Mr Adams said: “It’s too big, it’s too high and it is too close to my boundary.

“I had every reason to expect a site visit, hoping the person who came would say, ‘Oh my goodness me, I see what you mean’ as everybody else has.” The council confirmed that no planning application was submitted but it would not be taking any enforcement action.

Rob Cramp, principal planning enforcement officer, said he acknowledged that the “unauthorised development” did have “a local visual impact” on Mr Adams’ “amenity” but did not give rise to “sufficient planning harm” to warrant a site visit.

Mr Adams said: “They finally decide ‘at the end of the day we can avoid a site visit’ and that was the end of it.

“I have done all that I can. Planning have told me that I could go to the ombudsman but I have no idea what that entails.

“I don’t like the idea of being at loggerheads with my neighbour. I don’t want a war, what I want is emphasise the ineffectiveness of planning. I think this is a pretty strong case to illustrate that.”

Mr Walker wouldn’t comment other than to say the council had told him he would not require planning permission.