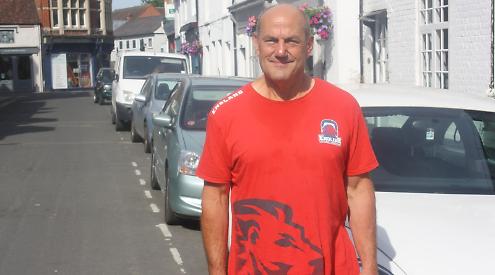 RESIDENTS of a Henley street are contesting parking fines they received for using a bay they have traditionally been able to.

At least six people in Friday Street received penalty charge notices of £50 between May 25 and May 29 for parking at the end of the street where it meets Reading Road.

Their cars had been parked in the 10-vehicle bay, which has a one-hour time limit, but they say this has never been enforced for those drivers displaying a resident’s permit.

This follows the stricter regime introduced by Oxfordshire County Council since it took over responsibility for civil parking enforcement from Thames Valley Police last year.

Since November 1, tickets and fines across South Oxfordshire have been issued by the council’s wardens rather than police officers.

Rachel Galbraith and her partner Jeff Ellison received a £50 penalty on the morning of May 25.

Ms Galbraith, who has paid the fine reluctantly, said: “The bay does have notices that say you can only leave the car for one hour. However, we’ve been here since 2017 and this has never been enforced.

“My understanding from other people on the street who’ve been here for much longer is that they’ve never had problems. Six or seven cars received fines on that Friday morning and it continued over the next few days.

“You can park overnight but from 9am they start enforcing it. You see the wardens patrolling and they ticket on a regular basis.

“The frustrating thing is we weren’t notified [of the new regime]. We certainly didn’t get anything through the mail.

“If there is going to be a change they need to allocate a certain amount of this parking to residents.”

Mr Ellison said the couple now parked their car on different streets around the town and then walked home.

He said: “It used to be an occasional thing to drive around looking for spaces and now it’s every day. Typically, we’ll wind up on Station Road or down by the river. It’s quite a trek. We’ve got a four-year-old, which make things a bit more difficult.”

He said it was aggravating to see the bay remaining clear throughout the day.

Adrian Dewhurst was also ticketed on May 25 but has appealed.

He said: “This little barrage of ticket dispensing has damaged the entire parking ecosystem that existed on the street. No one is allowed to park in front of their house.

“I’ve lived here for six years and I’ve always had a resident’s permit. We now have to just park wherever we can. We’ll be infringing on other streets’ parking spaces but there’s no other option.”

Mr Dewhurst said that previously anyone with a resident’s permit was able to park in the bay.

“The simple solution is to return it to the way it was,” he said.

Dougy Butterworth, who has lived in Friday Street for 18 years, has also appealed against his fine.

He said unlawful parking had not been enforced previously.

He said: “I’ve been parking here overnight for as long as I’ve been here. I’ve always thought that it was all right if you had a resident’s
permit. We should have been warned. All it would have taken was for them to put something through the letterbox that things were changing.”

Leslie Plumb, who lives on the end of Queen Street near Friday Street, said the problem was that people didn’t understand how the system worked.

She said: “I’ve lived here for 21 years and there has never been enough parking space on Queen Street or Friday Street. Each resident is given two parking permits but the streets cannot accommodate that many cars. If you live here, you learn to live with it. I haven’t had a ticket because I park in the correct places.”

A spokesman from the county council said: “There was an extensive publicity campaign when Oxfordshire County Council took over civil parking enforcement in November 2021 to let drivers know that parking infringements would be enforced more efficiently.

“There were no changes to the parking restrictions, only a transition to the agency carrying out the enforcement.

“Currently there are no exemptions to allow residents to overstay the one-hour time limited bays within Henley but a right of appeal exists for motorists who feel a penalty charge notice has been issued unfairly.

“The situation will be kept under review and officers are currently working closely with the town council on its aspirations for minor amendments to on-street restrictions.”

• The number of parking fines issued in Henley since Oxfordshire County Council took over responsibility for enforcement has risen gradually. A total of 354 penalty charge notices was issued in May, the highest monthly figure since the change was made. The totals were: November 262; December 107; January 162; February 189; March 270; April 297.