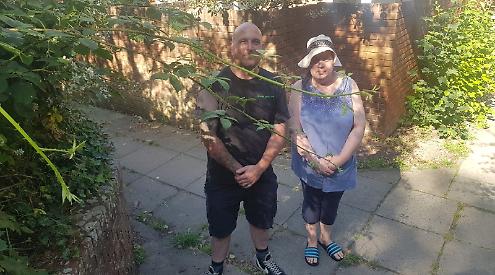 RESIDENTS of a block of flats in Henley are battling to have a pathway cleared of brambles, nettles and overgrowth.

The flats in Mount View are owned by South Oxfordshire Housing Association but it has not carried out the work despite repeated requests.

Tony Perks said he had been asking for the path behind the flats to be cleared throughout the three years he has lived there.

Mr Perks, 46, said: “All the residents here have been trying to get that area mowed and all the bushes cut back. We have brambles that are neck high.

“It got to a point where we were begging them to come out. I said the brambles were head height and in the dark someone could catch their face in them.”

Residents pay a service charge for routine maintenance but Mr Perks claimed standards were slipping and the block was being neglected. “They will mow out the front but will not touch anywhere around the back,” he said.

The residents have been told by both Oxfordshire County Council, the highways authority, and Henley Town Council that the area is Soha’s responsibility.

Mr Perks said: “Highways tell us they will mow the grass down to the embankment but up to the bank is Soha’s responsibility, which includes the bushes.

“Henley Town Council have been great — as a gesture of goodwill they got their parks team to cut that back a little bit recently.

“I have emailed them [Soha] copies of everything, the plans. They have basically said they will talk to the town council but it just feels like a stalling tactic. I never hear from them.

“I am at my wits’ end now. I have done everything I can do. Soha have had numerous phone calls about this and haven’t taken it any further. I don’t know what the next step will be unless we take matters into our own hands.”

Laure Denham, who has lived at the flats for 15 years, said the problem dated back to before Mr Perks’ arrival.

“They have to do something — it’s beyond a joke now,” she said.

The residents have struggled to have other problems solved, including:

• Reinstallation of railings that were removed.

• Reinstatement of the layby by the path.

• Trimming of the trees in front of the flats that block light and residents’ views.

Mr Perks also said that an elderly man had fallen on some steps last year due to mud and long grass.

The residents are supported by Deputy Mayor Donna Crook, who said: “Soha should be maintaining that area.”

Councillor Crook claimed Soha had also failed to carry out basic repairs and maintenance at the block.

She said: “For the last four years I have been banging my head against a brick wall trying to replace a fence. Soha just don’t seem to be bothered with this part of town and it’s really
frustrating.”

“We believe the area you are referring to is already an immediate focus of attention for our estates team and contractor.

“We are in regular contact with residents at Mount View and always aim to act promptly to enquiries or complaints about our services. We welcome feedback, whether it’s positive or not, as it provides us with an opportunity to improve.

“We encourage residents to let us know about any health and safety issues but we do not have a record of any specific falls in this location.”