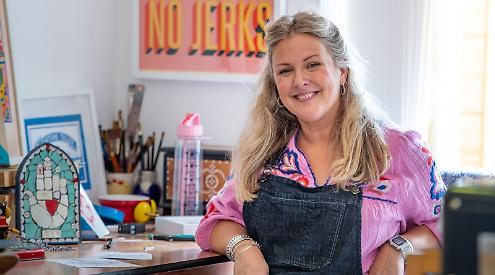 AN artist from Henley has been granted planning permission to turn her garage into a studio.

Jo Harris received retrospective consent after she installed a toilet and sink, electricity and two roof lights at the building in Newtown Gardens.

Neighbours in Harpsden Road had complained to South Oxfordshire District Council, the planning authority, about being overlooked and Henley Town Council described the development as “unneighbourly”.

But Adrian Duffield, head of planning at the district council, said the studio would “not materially harm” the amenities of nearby homes or the character or appearance of the garage or wider area.

Miss Harris, who founded Henley School of Art, says she now wants to move on with “positivity” after a tough period.

Last spring she decided not to renew her lease on the art school building off Hart Street following a decline in students as a result of the coronavirus pandemic.

Miss Harris said: “I really loved the art school but I had it by mistake in a way. It was the love of my life but it was a very demanding role for one person.

“It is not really a one-person job as someone needs to do the marketing, another the teaching and another the admin.

“I was so willing to take it on and I loved my studio and my students but I am an illustrator and an artist.

“I haven’t been doing my own work as I just didn’t have the time.

“I just feel exhausted and broken by the whole experience but this studio is a way of moving forward positively.

“I don’t have an income at the moment but I can’t just give in and be depressed. Doing it this way is giving myself back my own artistic practice.

“From a psychological point of view, I have taken a battering and it has been hard to restart again with covid and the lockdowns.

“Having the studio allows me to reach for some joy from somewhere and going back to my roots gives me a chance to restart.”

Miss Harris bought the double garage four years ago when it was in a poor state of repair.

She said: “It was dilapidated with vines growing inside. The problem with it is it was built in the Seventies from a kit. I could only use it for storage but then after a year everything in there had gone rotten.

“There was no way I could keep my car in there as I’d be afraid that the roof could fall in, so when town councillors made a comment that converting the garage would take away car parking, that was not right.

“When I bought it, it came with planning permission for a house, which would mean demolishing the building and starting from scratch.

“When I kept the garage, the neighbours in my road almost threw me a party, they were so happy.

“Now that I am going to smarten it up and use it, they are delighted. It is no longer an eyesore.

“All I am really doing is the internal structure and putting lights in it. It is going to be glorious. I might even grow some roses out the front.”

Miss Harris said people had been “tear-jerkingly kind” since she had to close the art school.

“I have received some gorgeous emails telling me what the school had meant to them and encouraging me to keep going,” she said.

“I am doing online sessions at the moment, which are just keeping me afloat.

“Come September I will be starting to teach at different venues and I have been approached by Shiplake College and The Henley College to do some teaching for them.