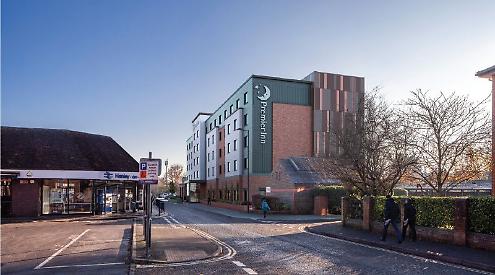 A NEW hotel in the Henley station car park would have a “negligible” impact on traffic in the town, claims the developer behind the plan.

Blocwork says that an independent traffic survey carried out at a “comparable” Premier Inn in Eastbourne five years ago showed that its guests planned to be in the seaside town anyway and would have simply stayed somewhere else if the hotel wasn’t there.

The Henley hotel would be built on 1,360 sq m of car park opposite the station entrance, next to the public toilets, and would have 115 rooms and a restaurant.

Blocwork, a partnership between the landowner Network Rail and developer Bloc Group, of London, applied for planning permission in December 2020.

But town councillors, conservationists and near neighbours have objected, saying the hotel would be out of keeping with the area.

Oxfordshire County Council, the highways authority, issued a holding objection as it wanted more information on the likely impact on traffic.

Now Blocwork has responded by submitting the results of a survey of guests staying at the Eastbourne hotel between November 28 and December 1, 2017.

A total of 180 guests responded and 164, or 91 per cent, said they would have found other accommodation in the area.

The main purpose of their visits was business-related with 118 people, or 66 per cent, choosing to stay there for this reason and 33, or 18 per cent, for leisure.

A report by consultants RGP says: “All those who travel to the proposed hotel at Henley would almost exclusively be undertaking a trip to this area regardless of the Premier Inn.

“The fact that there is a Premier Inn does not increase the number of trips being made to and from this area since those visitors would simply book alternative accommodation nearby or complete their journey without an overnight stay.

“For those visitors staying multiple nights, the presence of the Premier Inn would negate the need for them to travel in and out of Henley each day, as could currently be the case, hence the proposed hotel could reasonably remove some existing peak-hour traffic movements. The Premier Inn would not generate ‘new’ vehicle trips.”

A decision on the application is due to be made by South Oxfordshire District Council, the planning authority, by July 11.