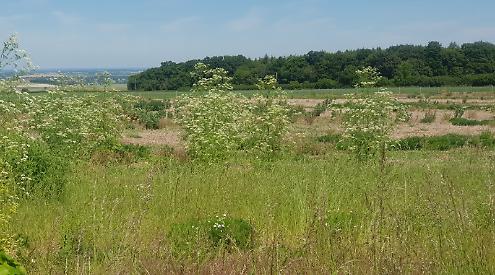 A MAN has issued a warning about poison hemlock growing near his home in Woodcote.

Martin Stanworth, 68, has lived in Behoes Lane with his wife Denise for the past 15 years but this is the first time the couple have seen the plant growing on surrounding farmland.

The semi-retired electrical engineer thought it was cow parsley. The two plants look similar with umbrella-like clusters of white flowers but hemlock is poisonous.

Mr Stanworth said: “It was the platinum jubilee weekend and my son and his family came to stay and he asked me, ‘Why is there a load of poison hemlock growing around your house?’

“We then did a bit of research on the finer points of distinguishing between hemlock and other plants and I am 99 per cent sure that is what it is.”

The toxins in hemlock are alkaloids, including coniine and gamma-coniceine, which cause muscular paralysis, leading to respiratory failure and eventually death.

Only a tiny amount of hemlock can prove fatal to a human or to livestock. The plant was said to have been given to the Greek philosopher Socrates at his execution. Mr Stanworth said his son was a keen forager so he wanted to warn other people who might be tempted to pick it.

He said: “There are a few edible plants that can easily be confused with hemlock, so it is important to be able to recognise it and not accidently ingest it. I noticed it growing as seedlings in our garden.

“The more common cow parsley, which I thought it was, grows to 1.5m rather than 2m or more for hemlock and can be used in soups and for flavourings.

“Hemlock stems are mottled with purple spots, it almost looks like blood spatter, whereas cow parsley has a slightly hairy stem and it doesn’t have the blotches, although it might have some red or purple discolouration but it is a smooth transition.

“Also, the shape of the stem is different. Hemlock has a round, hairless stem but most of the other similar plants have hair and they are not round but kind of like celery- shaped.”

The plant also emits an unpleasant odour in a gentle breeze or after being damaged.

The arable land around Mr Stanworth’s cottage usually has crops growing on it and the perimeter is sprayed with some sort of weedkiller but not this year.

He believes the lack of groundwork has allowed the hemlock to prosper and he has seen it sprouting on other land on the outskirts of the village.

Mr Stanworth said: “People have said that hemlock has been growing here, on and off, for many years but while they were farming the field it has kept it under control.”

He said the landowner had been helpful and planned to destroy the hemlock before it seeded in late summer.

A spokesman for South Oxfordshire District Council said: “While no formal action is required if poisonous plants are found in the environment, we suggest that if residents do find them that they inform the landowner.”