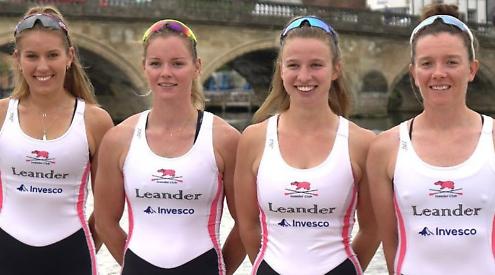 It had athletes featuring in 18 races today (Friday) but found the going tough against international competition.

Henley Rowing Club and Upper Thames RC failed to get through the heats of their competitions but Shiplake College made it through to the next round of the Diamond Jubilee Challenge Cup.

Leander didn’t get off to the best possible start when their B crew lost to Danmarks Rocenter by three-and-a-half lengths in the Town Challenge Cup, for women’s fours.

The Henley crew maintained their position at one length behind the Danish crew until the Fawley mark where the gap opened to two-and-a-half lengths.

The race finished at seven minutes and 41 seconds.

Leander’s Ruth Siddorn, who lives in Upton Close, said: “We knew we were against a world cup silver medallist crew which was always going to be tough.

“We held them really well and got out the start well. We did the best we could. Now we’re just excited to cheer on the rest of our club and see what Saturday and Sunday bring.”

The club’s next race, also in the Town Challenge Cup, was delayed after their opponents, Rowing Australia, requested a postponement after their boat was damaged at the start line.

The rigger needed repairing after another boat collided with the Australian’s and the stewards of the regatta agreed to reschedule the race for 12.25pm, an hour and 40 minutes later.

When it did take place, Leander’s A crew beat the Australians by half a length. No time was taken.

Leander took an early lead of a quarter of a length, which increased to a third at Fawley. But the Australians came back, reducing the deficit to a canvas before coming to within 2ft of their opponents.

But when the Australians took the lead, Leander gave a big push and put themselves back in front as the race drew to a close.

Juliette Perry, of King’s Road, said: “The Australians are really strong and we didn’t expect to be up on them as much as we were – it was very exciting – and we tried to stay focused and we came through in the last 100 metres.”

At the barrier the crew had a lead of half a length which increased slightly to two-thirds at Fawley. The lead shortened back down to half but had increased by the finish to win by two-and-a-quarter lengths in a time of eight minutes and 35 seconds.

Campbell-Orde, of King James Way, said: “We had a solid mid-pace from the start and then we just got stuck in and we’re really happy with how it went. Now we’ll just see how many more races and wins we can get.”

In the Double Sculls Challenge Cup, Leander pair James Cartwright and Victor Kleshnev lost to a Texas Rowing Centre pair by a length in a time of seven minutes and 30 seconds.

Cartwright said: “It was a tough race, we didn’t know the speed of the other crew too well. They are a very established combination. We just wanted to go out there and test our speed and, overall, we are happy with our performance.”

Kleshnev said: “We had the speed for the first part and then it just fell through, but we are happy with our progress and we are excited about what is to come.”

In the same competition, Leander’s Nathan Hull paired with Callum Dixon, of Queen’s University, Belfast, but lost out to a composite comprising the Tideways Scullers’ School and Nottingham Rowing Club by four lengths in a time of seven minutes and 53 seconds.

Leander was beaten by Claires Court School in the Fawley Challenge, for junior men’s quadruple sculls, despite leading the race for one mile.

Claires Court drew level before taking a lead of the canvas and stretching this further towards the finish to win by a length in a time of seven minutes and 26 seconds.

But then Leander won in the Ladies’ Challenge Plate, for men’s eights, by one-and-a-half lengths in a time of six minutes and 18 seconds.

The Henley crew look a small lead from the start which then increased and a one stage was three lengths in front before easing off near the finish.

The B crew were first up against Waiariki RC, from New Zealand, and at the barrier the Kiwis had a two length lead.

They had extended their lead to three lengths by the mile marker and crossed the line four and a half lengths ahead in a time of seven minutes and 40 seconds.

Lender’s Charlotte Fennell said: “We knew they were an international crew and our aim was to stick with them for as long as possible, just row our best race and take the opportunity to row against people of such a high standard.

Seun Olubodum added: “You always learn from rowing the Henley course, each race is never the same.”

In the end, the Chinese won “easily” in seven minutes and 46 seconds.

Leander’s Rosa Thomson said: “They are pretty much the best rowers in the world at the moment and that will likely be for the next few years to come.”

Leander won one and lost three heats in the Remenham Challenge Cup.

A composite crew with Imperial College, London, dispatched a Tideway Scullers’ School and Universities of Western Australia Boat Club composite by three-and-a-half lengths in a time of seven minutes and 20 seconds.

But Leander were defeated by the Princeton Training Centre and Advanced Rowing Initiative of the Northeast, USA, by four-and-a-half lengths in a time of seven minutes.

A Leander and Tideway Scullers’ School also crashed out to the Chinese National Rowing Team by four lengths in a time of seven minutes and 12 seconds.

In the Visitor’s Challenge Cup, a Leander and Thames Rowing Club composite overcame Cambridge University by one-and-a-half lengths in a time of six minutes and 50 seconds.

A local derby between Leander and Upper Thames took place in the Wargrave Challenge Cup. Leander were victorious by two-and-three-quarter lengths in a time of seven minutes and 36 seconds.

In the heats of the Thames Challenge Cup, Leander won one and lost one.

But a Leander and Thames Rowing Club composite were knocked out by Sydney Rowing Club, Australia, by a third of a length in a time of six minutes and 33 seconds.

Meanwhile, Upper Thames were knocked out in the heats of the Wyfold Challenge Cup by NSR Oslo, Norway, by a canvas in seven minutes and 10 seconds.

Henley Rowing Club were defeated in the heats of the Diamond Jubilee Challenge Cup by Wycliffe Junior Rowing Club C by two-and-a-half lengths in a time of eight minutes and 14 seconds.

But Shiplake College go through to the next round, with a comfortable win over Lea Rowing Club by four-and-a-half lengths in a time of eight minutes and six seconds.