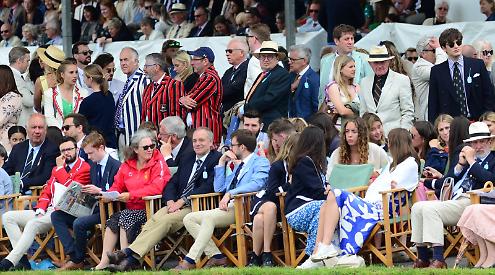 LEANDER CLUB athletes will compete in eight finals on the last day of this year’s Henley Royal Regatta today (Sunday).

But it was heartbreak for those crews who were knocked out in yesterday’s semi-finals, including Shiplake College in the final race of the day in the Jubilee Challenge Cup to Claires Court School.

In the morning Leander got off to a good start, reaching two finals.

They beat University of California in the Hambleden Pairs. Annie Campbell-Orde and Sophia Heath led by a third of a length passing Temple Island, which they extended to half a length by the quarter mile point.

The pair reached the barrier in two minutes and 49 seconds with a length and a half lead over California.

Their lead lengthened past Fawley and Remenham, and by the mile point they were three lengths ahead.

They were warned for steering at the mile and the eighth point but maintained their lead over California for the rest of the race.

The pair won by three and three-quarter lengths in a time of 9 minutes and 23 seconds.

Leander’s men raced their semi-final against London Rowing Club in the Prince of Wales.

The crew were warned early on about their steering but passed the island with a slight lead.

They had extended this to a length at the quarter-mile point and reached the barrier with a length and a half lead in two minutes and three seconds.

Their lead lengthened to two lengths at Remenham and three lengths at the mile before reaching five lengths.

Leander slowed towards the finish and crossed the line three and a half lengths ahead with a time of seven minutes and 20 seconds.

Their women’s four crew lost their semi-final of the Town Challenge Cup to Danmarks Rocenter from Denmark.

The Danish crew started fast and never relinquished their lead.

They passed the quarter mile a length ahead and led Leander by two and half lengths reaching the barrier.

By Remenham they extended their lead to four lengths and they were five lengths ahead by the mile and the eighth.

Danmarks Rocenter crossed the finish line three and three quarter lengths ahead of Leander in a time of eight minutes and eight seconds.

Henley Rowing Club were knocked out of the Prince Philip Challenge Trophy by Winter Park Crew.

However, Henley began to fall behind as Winter Park took a lead of one length at the three-quarter mile point, which they maintained through to the mile point.

However, it was too little too late as Winter Park crossed the finish line half a length ahead in a time of eight minutes and five seconds.

Chris Boothroyd, vice-president and coach at Henley Rowing Club, said: “They did really well, especially as they were going up against the number one rowing team in the country.

“They stuck to their race plan and pushed them right to the line but it just wasn’t to be.

“We went into the race thinking we could win, so I can imagine they’ll be quite annoyed. This is nine-months of work, and to come away without a medal is disappointing.

“But I still think they can be really proud of what they achieved.”

Leander and The Tideway Scullers’ School were defeated by the Chinese National Rowing Team in the race for the Queen Mother Championship Cup.

The crews were level until the barrier when China took a canvas lead. By Fawley, China extended their lead to half a length at three minutes and 18 seconds.

At the one-eighth mile, Leander and Tideway reduced China’s lead to a canvas but were not able to close the gap finishing half a length behind at six minutes and 49 seconds.

John Collins, of Upton Close who is also the Leander club captain, said: “We knew we were up against some strong rowers – it’s a very classy crew.

“We made a lot of changes this week and put in lots of hard work. We knew we needed a perfect race to stand a chance and credit to the boys – we executed the race really bloody well.

“There were moments where I really thought we would get through them but they’re a really classy crew and they had an answer to everything we threw at them.

“I’m disappointed, of course, I wanted an eighth win but I’m really proud of this team and of the fight we put up and the way we conducted ourselves.”

In windy conditions, Leander started strongly and were three-quarters of a length ahead of Vesta by the quarter mile point.

They reached the barrier a length ahead in a time of two minutes and 12 seconds.

By the time the boats reached Fawley, Leander had extended their lead to a length and a half over Vesta, who were warned for steering.

They maintained their lead for the rest of the race and crossed the finish line two and quarter lengths of Vesta in seven minutes and 43 seconds.

A mixed men’s eight crew featuring rowers from Leander and Oxford Brookes won their semi-final in the Grand.

They were competing against another mixed team from the US comprising rowers from California Rowing Club and Penn Athletic Club.

The Brookes and Leander crew, which featured three Leander rowers, raced into a one-length lead by the quarter mile point, which they maintained all the way through to the three-quarter mile point.

Their lead was reduced to three-quarters of a length at the mile point, but they were able to maintain this distance until the finish line. They finished the race in six minutes and one second.

Leander Club and Oxford Brookes University were beaten by Cambridge University in the Goblets event by one and three-quarter lengths.

The boats were level at the quarter mile but at the barrier, Cambridge took a 2ft lead.

The Leander and Oxford crew continued to fall behind to three and three-quarter lengths at one and one-eighth miles and then shortened the lead at the finish.

The race was completed in seven minutes and 15 seconds.

In a very rain race, a mixed crew of Leander Club and Thames Rowing Club were beaten by University of Washington in the semi-finals of the Visitors.

The lead at Fawley was one length which the mixed crew closed to half a length by the one and one-eighth mile. The final result was a win by one length at six minutes and 48 seconds.

Leander Club beat Yale University in the Ladies’ in the pouring rain.

Leander continued to increase their lead throughout the race from one and three-quarter lengths at Fawley to three lengths at one mile before bringing it down to two lengths at the finish.

The rain cleared for the Remenham Cup clash between Imperial College and Leander Club against Princeton Training Centre and ARION, USA.

The Brit crew took the win by two-thirds of a length in a time of six minutes and 45 seconds.

Leander Club men’s eights were beaten by Thames Rowing Club by two-thirds of a length at six minutes and 19 seconds in the Thames cup.

In the final race of the day, Shiplake College women’s fours were defeated by Claires Court School.

In wet conditions, Shiplake started in the lead, by half a length ahead at the one-quarter mile.

Claires then shortened their lead to a quarter of a length at the Barrier before taking the lead for the remainder of the race, only by 1ft at Fawley.

At one mile, the lead was one length which decreased once again to three-quarters of a length at one and one-eighth miles.

Shiplake ended up losing by half a length in seven minutes and 45 seconds.