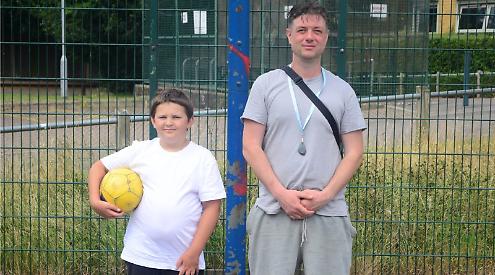 A FOOTBALL team is being set up for disadvantaged young people in Caversham.

RG4 FC is for children living in the Amersham Road area, which has one of the highest rates of child poverty in Reading.

Many of the youngsters on the estate don’t have a chance to play for a football team due to a lack of public transport in the area.

The team is part of the RG4 academy run by the Weller Centre, which already has a youth club and runs a football training school over the summer.

The community centre is a lifeline for some residents, offering free clothes and services such as therapy and advice, and it gave out food parcels during the coronavirus pandemic.

Manager Simone Prendiville said: “It’s quite an isolated estate and there are a lot of children living here. There is a shuttlebus that takes you into town but there’s still many people who don’t leave the area.

“The children are even more isolated. They have the bus that takes them to school but apart from that people are a bit wary about letting their children out.

“To have something such as this academy at this end of Caversham will be incredible.”

The team, which will be open to boys and girls, will comprise 13 players and play nine-a-side matches at King’s Meadow in Reading against other teams from the wider area, including Bracknell and Newbury.

The RG4 FC official kit has been sponsored by Speedy Hire in
Reading.

Sean O’Reilly, who will coach the team, said: “The aim is if a parent has got a child of five or six, they can bring them along to the football academy for the 12-week programme.

“Eventually the children at the academy will be able to go straight into a football team. We want to make football accessible and to create a team mentality.

“We’ve already had people come in to ask if they can help.”

The academy is run through donations and funding from the Earley Charity, which provides grants to worthy causes.

Barclays gave a grant which Mr O’Reilly has used to buy footballs and a rebounder for children to practise ball control.

Mr O’Reilly, who grew up in Southcote, said: “I played football a lot as a kid. It started with a local youth club and we had the opportunity to play other youth clubs. We even went to the national youth club championships. It was amazing.

“I feel it gave me life skills. Football brings everyone together and that’s what I’m looking to do here.”

Adam Bingham, 10, who lives in the area, hopes to play striker for the team like his idol Cristiano Ronaldo does at Manchester United. He said: “I’m really excited about the academy because I love football. It helps your body with exercise and you can learn new things.

“I play football at school but this is my first time playing for a team. I haven’t really played a lot but I’m pretty good at it.

“My favourite player is Ronaldo. I do his celebration when I score — I run and slide on to my knees.

“I’ve been waiting for something like this to happen. As soon as I found out I was really excited.”