Ukrainians among scores of children having fun at summer play scheme 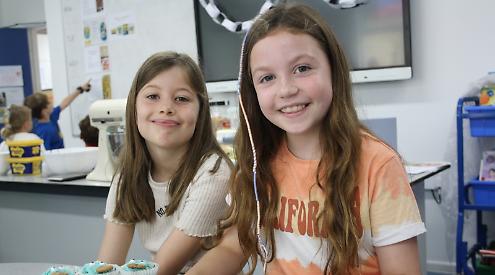 The scheme, now in its 43rd year, allows children aged six to 11 to take part in activities for one week during the summer holidays.

It has traditionally been held at Badgemore primary but was relocated this year to provide extra space.

The scheme is a not-for-profit organisation led by a team of 10 adult leaders and 30 young adults, who help co-ordinate each day’s events.

David Edwards, who has been chairman of HOPS for five years, said: “It has been running for 43 years now, which is almost as old as me.

“You get kids whose parents say they came here as children.

“The great thing is the children have the choice of what they want to do, whether it be woodworking or the youth choir.

“The biggest thing for me is the independence. At school, a teacher will tell you when it’s maths or sport but here they can choose what to do and when to do it.

“Last year was the first year back after covid and it has returned in full force this year. We are back to full capacity.”

Twelve Ukrainian children were welcomed to the scheme free of charge.

Mr Edwards said: “It is nice for them to be a part of the community.

“There have been difficulties with communication but they are running around just like everyone else, getting hot and having fun.”

Lead helper Will Lebeau, from Bix, said: “There is more space here at Trinity, which means we can deal with a higher number of kids.

“They are really enjoying the larger grounds. The best thing about these playgroups is that the kids learn new things that they wouldn’t necessarily do at school. They probably wouldn’t do woodwork or hold birds of prey.”

On Tuesday, helpers from Berkshire Birds of Prey allowed children to hold birds such as kestrels and owls.

Annabelle Rogers, 10, who held a barn owl, said: “I wouldn’t normally get the chance to pet animals, apart from my dog.

“This whole week is super-fun and there is loads of cool stuff, like baking, woodwork and animals.”

Elsewhere, children made cupcakes in cookery classes, had their hair braided and made pom-poms in the arts and crafts area. Some sang with members of the Henley Youth Choir, while others got the chance to use tools at the woodworking station.

Amelia, who is a pupil at Trinity primary, said: “I am a here for the whole week. It is fun because there is so much to do.

“I like the art room because you can make loads of cool stuff like spin art and pom-poms but I also liked making the cupcakes. It is definitely more fun than I usually have at school.”