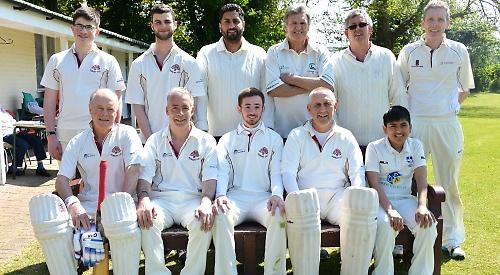 HURLEY ran out winners in their friendly match with local rivals PINKNEYS GREEN at Shepherds Lane on Sunday.

The visitors won the toss and invited Hurley to bat first. Hurley’s opening pair of Mike Walton and Pat Hinnell had only a single on the board when Will Heyes nibbled one away from Hinnell who edged it to slip where Kevin Snapes leapt to take a two-handed, flying catch.

Dave Walton joined his brother but failed to make much of an impact, managing only five runs before slapping a return catch to Labh.

Scott Taylor and Walton set about rebuilding the innings, putting together a patient partnership of 71 in 22 overs.

Pinkneys Green rotated their seamers to good effect, keeping a lid on the run rate. After the drinks break the batsmen looked to push on but this led to a flurry of wickets.

Walton edged Labh on to his stumps via his pad and was replaced by Steve Taylor who looked in good touch scoring a dozen runs before falling to Will Heyes.

None of the other Hurley batsmen managed double figures as Heyes ripped through the order. The innings ended with the run out of Hassan Gul.

Defending a small total Hurley needed to bowl and field well. Ross Brown and Mo Basharat opened the attack and Brown got an early breakthrough bringing one back in to bowl Kevin Snapes.

With his side staring into the jaws of defeat, a captain’s innings was needed from Nick Jones, which he duly provided.

A partnership of 40 with Jinman gave the visitors hope before two quick wickets turned the game towards Hurley again.

Paul McDermott trapped Jinman leg before wicket attempting to sweep and Taylor bowled Labh in the next over.

With 46 runs still needed and only two wickets remaining, Hurley were back in the driving seat. However, Jones refused to give in and put together a stand of 31 with Fuller.

Matthew Wadsworth claimed the vital wicket of Fuller with a full delivery that swung into the off stump. With a dozen more runs needed for a Pinkneys victory, Brown was brought back.

Jones and Fuller got within four runs of victory when a bouncer from Brown was fended off to gully by Austin, where Matt Hampton, carrying an injury, managed to leap to hold the catch above his head to win the game.