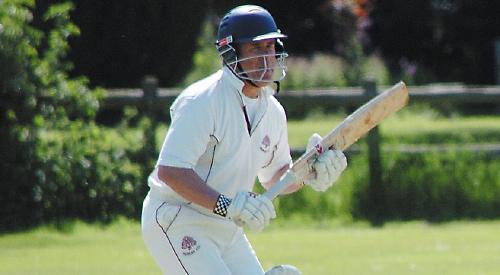 A RECORD HURLEY 10th wicket stand of 96 could not paper over the chasms in the visitors’ batting as it failed to come to terms with the swing and seam of COLESHILL’S Mike Scott and Martin Bainbridge in Saturday’s Division 2 clash.

The overcast and humid conditions favoured an early bowl which Coleshill chose to do. A boundary apiece for Clive Williams and Imran Arshad were a false dawn as Williams edged to slip and Arshad followed with a loose slap to point as Hurley slipped to 8-2 from two overs.

Phil Ridgeway and Shoab Riaz added 25 before Ridgeway was undone by one that cut from leg and took off. Riaz began to get the ball away but then managed to York himself with the score on 54-4.

Both Taylors left balls that cut and took their off stumps and Hurley collapsed to 81-9 after 26 overs.

An outstanding 72 from Ian Dawkins coupled with Mike Walton dropping anchor produced a last wicket stand of 96. Dawkins’ innings included a six while Walton hit three fours. Dawkins was finally trapped lbw in the final over as Hurley ended on 177.

Skipper Dominic Spencer was the key to the Coleshill reply and the crucial drop at square leg when he had reached 20 and had sent back 28 consecutive dot balls proved disastrous to the visitors.

James Martin fell to Arshad with the score on 27, but 62 was added for both the second and third wickets as Saunders and Bainbridge played second fiddle to Spencer who upped the gears. Saunders chipped Ridgeway to Riaz at point with the score on 89 after being bowled by a no-ball by Riaz only moments earlier.

Bainbridge tried to cut Ridgeway and was bowled as the score progressed to 151-3. Holdsworth followed next over to Scott Taylor to offer a brief slice of hope, but Coleshill secured victory with 5.3 overs to spare to pick up their first win of the season.

A delayed start caused by an accident on the A404 which only saw nine HURLEY 2nds players and six from LITTLE MARLOW 2nds at Shepherds Lane at the scheduled start time was a prelude to a good Division 4 match that ebbed and flowed throughout its 100 overs.

On winning the toss Hurley skipper Nigel Haines elected to field and Ajmal Ali, on his debut, could only manage two balls, one of which was a wide, before having to retire with a shoulder injury.

With regular opening bowler Mike Cole also suffering with an injury 14-year old Josh Cole finished the over and made the breakthrough after two balls trapping Imran Ashaq in front. Two overs later he removed Danny Ishaq thanks to a catch at slip from Haines.

Abdullah Ali bowled well from the Shepherds Lane end and was rewarded by two late wickets in his spell, cleaning bowling Richard Tinsley and having Steve Shore caught behind by Dave Simoes chasing a wide ball. The two batsmen had put on a steady 106 run partnership in 25 overs to give the Little Marlow innings a springboard for later acceleration.

Impetus was provided by Ged Holmes and Shazad putting on 68 in only 11 overs as the fielders and bowlers began to wilt under the sun. Twelve-year old Liam Cole was unlucky not to get his first senior wicket as Shazad’s inside edge just trickled past the stumps.

Dave Walton bowled well and had Nicky Marie caught behind with a feint edge. Holmes was finally bowled by a flighted Haines delivery and Shazad was run out after being called through for a quick single by Awais Hussain, by a good piece of fielding and direct hit from Josh Cole at square leg.

Ken Fuller came in for some late punishment as youngsters Zane Yaqoob and Mahmood ran well and hit the bad ball to allow a declaration at 242-8 after 50 overs.

The Hurley reply got off to a positive start with Mike Cole and James Calliss putting on 32 in six overs for the first wicket. After playing some sumptuous cover drives Calliss tried one shot too many and was bowled through the gate by Mahmood. Abdullah Ali and Cole added a patient 112 for the second wicket in 25 overs, although Cole was dropped twice, as Little Marlow mixed up the bowling in an effort to find a breakthrough.

Imran Ishaq bowled well without any luck, beating the outside edge on numerous occasions. Ali was particularly brutal on anything short and it was the introduction of Hussain that saw Cole play a tired shot and miss a long-hop to be bowled round his legs and Ali hole out to Holmes at extra cover just after completing his half-century.

Josh Cole and Ajmal Ali kept up the momentum, the pair adding a brisk 41, before Cole was bowled by Holmes trying to work a straight ball on the leg side with the score at 199-4 off 43 overs.

With the required run rate at six an over Ajmal Ali continued to attack, hitting some lusty blows particularly off Danny Ishaq before trying the same to Holmes only to see his off-stump pegged back.

With Fuller and Haines at the crease the chance of a win slipped by and Hurley limped to 218-6 to secure the draw.