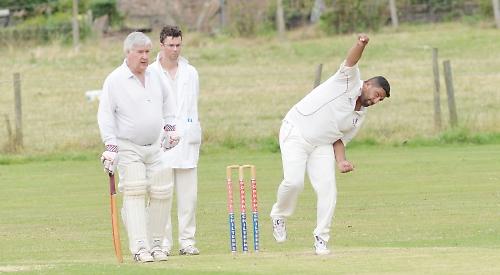 TIGHT finishes at Shepherds Lane on Sunday have become commonplace this season and another match that went the distance saw HURLEY hang on for a draw against THE HETAROI.

The visitors won the toss and opted to bat first. A wayward first over from Scott Taylor saw 11 runs on the board with Tim Drake hitting his first delivery for a maximum. Drake was cut short attempting another pull off Taylor but only succeeding in top edging the ball into his forehead and suffering a nasty cut. After first aid treatment he was taken to Wycombe hospital to have five sutures in the wound.

When play resumed Moiz Javed replaced Drake and only managed a single before edging Joe Graham to Steve Taylor at first slip, via the keeper’s pad. A partnership of 47 between Henry Wilman and Mike Price was ended by Paul McDermott as Wilman top edged to Mike Walton behind the stumps.

An entertaining over from Matt Hampton produced the wicket of Price, caught down the leg side by Walton, followed by seven wides. Dave Walton replaced Hampton and struck in his first over as Brian Slade smashed a full toss straight to McDermott at fine leg.

Ollie Fryer and Milo Abel added 63 in eight overs as Walton came in for some punishment. Skipper Mo Basharat brought himself on to replace Walton and struck in his first over. Abel beaten past the outside edge, made the mistake of leaving his foot raised and the keeper did the rest.

Steve Taylor bowled well without success despite beating Matthews on numerous occasions as the batsman played and missed often. Another wicket for Basharat and two for Henry Graham saw The Hetaroi dismissed for 221 in the 38th over.

In reply Shoaib Kayani showed aggressive intent from the start, crashing anything short to the boundary. At the other end the out-of-form James Calliss only lasted three deliveries, missing a straight one from Richard Slade. Hampton and Kayani added 24 for the second wicket before Kayani fell lbw to left-arm seamer Justin Abel. Hampton was bowled off his pads by Abel to leave Hurley on 45-3. Henry Graham and Steve Taylor both made starts but failed to convert to a big score.

At the start of the last 20 overs the game was poised with Hurley requiring 107 for victory with five wickets remaining and Taylor and Joe Graham going well.

When Taylor fell to a catch at mid-off by Richard Slade off Fryer, Basharat joined Graham and the chase for victory continued with Graham smashing the ball to boundary with abandon and Basharat chipping in with a glorious straight drive for four.

Graham reached his maiden half-century before the loss of Basharat put another dent in Hurley’s hopes. The batsmen refused to give up the chase, with Mike Walton and Graham keeping up with the required rate. The loss of Graham and McDermott saw the hosts nine down with 69 needed from the final 12 overs. Despite Mike Walton showing rare attacking intent, the required rate could not be maintained and the chase was abandoned with 43 needed from four overs. With all the fielders crowded round the bat the Walton brothers blocked out the remaining deliveries to save the match.