First woman to do Cresta Run since 1929 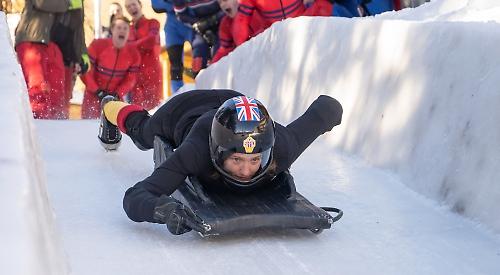 CARINA EVANS says she feels honoured to be the first woman in 90 years to descend the full Cresta Run course in Switzerland.

The mother-of-two, from Hurley, reached speeds of more than 70mph during her historic toboggan run after a ban on females was lifted by the St Moritz Tobogganing Club.

She reached the end of the 1,212m long run in 75 seconds but got her time down to 69 seconds in subsequent attempts.

Mrs Evans, 41, an army reservist, said: “I felt very proud because this was a big thing for the club, the first woman, and I didn’t want to screw it up.”

Competitors have no brakes on their toboggans and have to use their feet to “rake” the ice in order to slow down. Women were banned in 1929 amid safety fears and claims that the Cresta Run could lead to breast cancer.

In the years that followed women were only permitted to tackle a shorter run that began at a point called Junction, which starts from about a third of the way down the course.

More recently, she has been concentrating on achieving consistently quick runs in order to be able to qualify for the full course. She said: “It’s difficult to get your time down to 46 seconds — you’ve got to put a lot of time, effort and money into it so there are not many people, let alone women.

“The club took complete care of me. They gave me amazing teachers and trainers and they checked all my safety equipment.

“I had two more rides from Junction to show I could rake really, really hard to slow myself down. A lot of people fail these two tests.”

She completed her first full run on Thursday last week after mentor Paul Chiswick took her through the course and checked her equipment.

Mrs Evans said: “I spoke to my husband Nick who was at home doing the school run, and he said, ‘you can do it, you’ll be fine’. I prepared myself to be scared because the drop is huge and there’s no way you can stop yourself. If you come out it’s really quite dangerous.

“When I got to the top I thought how lucky I was to have excellent tuition but I was, for want of a better word, bricking it!

“I think pretty much everyone does but I had faith in my equipment and my trainers.

“Before you get there you have to be in a really happy place mentally – you don’t want to have any worries. Your heart is beating so you can almost hear it.

“As I went off there was a huge roar and cheer, although I didn’t hear it – you’re in your zone.

“You rake as much as you can and then gravity takes over and you realise you’re into the first, second, third corner and then Junction Straight.

“You see plumes of ice smoke all around you and you realise you’re going quite fast.

“You’re completely and utterly out of control for a good 15 seconds and you know your life is on the line but you have to think ‘many people have done it before and I can do it’.”

Mrs Evans said that once she had negotiated Shuttlecock, the infamous corner where a rider can leave the course if they are out of control, she could relax and enjoy the run to the end.

She said: “It was a huge sense of relief. It proved to the doubters that women are capable if given good instruction.

“I was really chuffed because I knew my dad would have been extremely proud.”

Her late father, Lt Col Digby Willoughby, who died in 2007, was the tobogganing club chief executive for 24 years so his daughter spent many Christmases in St Moritz.

Mrs Evans said: “Even as child I’d compete in children’s races... it was in my blood.

“I’m very mindful of my predecessors as well who did this many years ago.

“There are many clubs, in London especially, that only just allowed women in so it’s just great this club is able to move with the times.

“My family were absolutely elated and they were so proud. The club and the members have been very supportive. A huge thank-you to them and to the British Army.”

She dedicated her run to Christian Hobbs, who died on Boxing Day 2017, aged 17, as she is a friend of the family.

Mrs Evans said: “He was due to come out to be tower boy, one of the assistants on the run.

“He was the catalyst who made me think, ‘get off the pot and make a change’.

“The bravery of his parents inspired me to seize the day. Their strength gave me strength.”

Mrs Evans returned home to Honey Lane on Friday and spent the weekend with her husband and daughters Isabella, 13 and Marina, 12.

She then returned to St Moritz on Monday and has been doing more runs this week.

Mrs Evans, who is also the first woman to compete in the Harland Trophy, an inter-services competition, will return to Switzerland in March to compete in a race held in honour of her father.

Of the future, she said: “I’d like to ride in races competitively on the run and I’d also like to get my personal bests down consistently.

“There’s a woman who has gone from the Junction in 44 seconds and I’d like to beat that.”