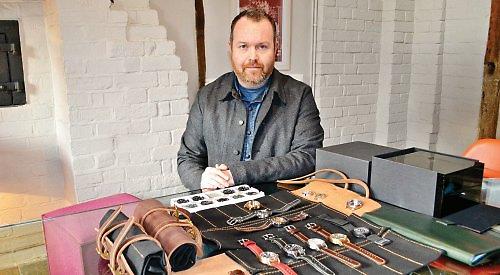 A MAN who quit his job to become a watchmaker is to showcase his creations on a new TV programme.

Piers Berry, the co-founder of Henley digital agency Redberry, stepped down as the company’s creative director in 2013 and launched his new venture, Pinion, later that year.

The 44-year-old, who lives in Kidmore End with his wife Jocelyn and teenage son Fred, has produced 15 models inspired by different time periods and sells almost 250 a year for between £1,900 and £5,000 each.

Now four of his designs are to appear on Taken, an American action thriller series based on the Liam Neeson film trilogy of the same name and produced by NBC.

They will be worn by the main character Bryan Mills, played by British actor Clive Standen, and several men in the supporting cast, including Gaius Charles, who played Dr Shane Ross in Grey’s Anatomy.

In the first episode, Mills, a former Green Beret who joins the CIA, is seen wearing a plain black Pinion watch cased in bronze with a canvas strap, which is based on the first model the company produced.

Mr Berry said: “It’s not ‘product placement’, where you pay millions of pounds to be prominently featured, but it will be good exposure and I’m told there are several shots where the watch is very clearly visible. The characters all have their own style and personality so I had to create a real variety of designs. Some were more militaristic and simple whereas others were more elaborate.

“I produced watches specially for the show but they’re closely based on past and current Pinion models.

“It’s the first time I’ve done something like that but I’m now working with the BBC on another project.

“I’m not that bothered about being credited personally as it’s more about building the company’s profile but I’ll definitely be watching ithe show.”

Mr Berry, who grew up in Nottinghamshire and trained as a graphic designer, moved to Henley in 2003 and settled in Kidmore End in 2010.

He had always been a keen watch collector and owned about a dozen models so he drew up his own designs using three-dimensional imaging software.

He showed these to Richard Baldwin, a business contact based in Switzerland, and the two struck up a partnership.

Mr Berry designs the watches and handles sales and marketing while Mr Baldwin is in charge of manufacturing and finding suppliers to make the components.

He said: “I think this is more of a challenge than my last role. It’s very easy to set up a web company because you only need a couple of clients and you’re on your way.

“With this, you’re investing in a product that you’re hoping will sell at a later date. You spend a lot of time, money and effort on designing and making it before you’re confident of seeing any return, so it’s a very different way of working.

“I had no idea how watches worked on the inside so I could only approach it from an aesthetic point of view.

“It was quite different from web design, which is two-dimensional, because I was creating a three-dimensional object that needed to work from a practical perspective. It started as a bit of a hobby and a creative exercise but as it progressed I started to think about it more seriously.

“I’d looked into manufacturing them before I met Richard but it was quite costly and hard to make the right contacts whereas he was in a position to make it happen. Our skills complement each other well.”

Pinion, which is named after a clockwork component, launched in November 2013 with three different models in a bronze casing, which was a popular style during the Second World War. The first 100 units sold out within months.

In 2014 the company launched two new ranges, one consisting of hand-wound watches and the other of chronographs, a type of old-
fashioned stopwatch, with “new old stock” mechanisms that were manufactured in 1969 but never used.

It sells straight to customers rather than going through retailers.

Mr Berry said: “This business is very low in terms of hassle. We like having individual relationships with clients whereas retail is more about shifting boxes as quickly as possible. It’s very rewarding.

“In my previous role I was designing websites for other people whereas now I’m designing for myself and getting enjoyment from seeing other people buying the finished result. It feels like more of a chance to ‘make my mark’.

“Also, watches have a timeless appeal and can be handed down through generations whereas a website is pretty temporary. Depending on its purpose, it might only be up for a couple of months and then disappear.

“The biggest challenge is wearing so many different hats because there are so many logistical and practical issues to manage.

“However, this has given me the freedom to pursue something I genuinely love.

“I’m always thinking about what I’m going to do next and I’m working on three new models at the moment.”

lTaken can be watched on Amazon’s Prime video streaming service from Tuesday.