Village celebrates as plans for 95 homes are rejected 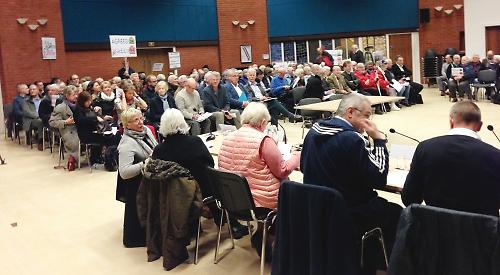 The company had applied to build 95 homes on land off Kennylands Road, which is earmarked for just 26 in the village’s neighbourhood plan.

The committee voted unanimously to reject the application — against the recommendation of a planning officer — after hearing arguments from parish councillors as well as a representative of the company who was jeered by people in the public when he spoke.

Councillor Barrie Greenwood, who led the neighbourhood plan working group, said: “We were delighted with the unanimous result.

“It was vindication for the neighbourhood plan and for the residents who supported the plan. It was a victory for democracy.”

Most of the protestors travelled to the meeting at Didcot civic hall on Wednesday evening last week on two coaches arranged by the parish council.

Outside the hall they chanted “respect our plan” and “94 per cent”, the proportion of those who voted in favour of the plan in a referendum in September.

Gallagher’s application said 57 properties, ranging in size from one bedroom to five, would be sold on the open market with another 29 being used for social housing.

There would be a children’s play area at the centre of the development and more “buffer” planting. Planning officer Phil Moule urged the committee to approve the application, saying that although it did “not fully accord” with the neighbourhood plan there was not a “robust and defendable” reason for refusal.

The development would not cause demonstrable harm on landscape, highways, ecological or forestry grounds to warrant refusal, he said.

As he spoke, Mr Moule was heckled by residents with people shouting “stitch up” and “shame on you”.

Councillor Fort, who was a member of the working party which compiled the neighbourhood plan, said: “It was a painful process to persuade the people of the village we had to accept 200 houses. We made room for them and carried the village with us.

“Your planning officers suggested the difference between 26 homes and 95 houses is purely technical. This beggars belief. I suggest that if you increased your council tax by 350 per cent, this would not be seen as a technical adjustment.”

Councillor Pearson told the committee: “The neighbourhood plan has been established with a good majority, which is local democracy in action. There should be support, protection and defence of the neighbourhood plan, approved by yourselves less than six months ago.”

Mr Pearman, who lives in Kennylands Road, Sonning Common, said: “Your officers recommend permission for 95 homes on this site. It makes a mockery of the district council and its so-called support for neighbourhood plans.

“This would be an insult as we have agreed to 26 homes. The extension of the site is as unacceptable as it is unnecessary.”

Councillor Harrison, who was recently expelled from the district council’s ruling Conservative group for criticising planning officers, said: “The neighbourhood plan has cost the parish council £69,000. That has pushed up the council tax for the parish council by 91 per cent, so the residents have paid for this.

“To ignore the neighbourhood plan would be a waste of taxpayer money. The proposed site area is four-and-a-half times the size of the original site.”

After each speech, the speakers were cheered and applauded by the residents. But Michael Knott, planning director at Barton Wilmore, the agent for the applicant, was booed before he spoke.

He told the committee that the development would make better use of the site and would help the district council to meet housing demand.

“Contrary to the objections and claims made here, it has been a full and quite appropriate gauge given by planning officers,” he said.

“The view of your officers is you need a sufficiently robust, defensible reason to refuse this application, taking into account all the reasons in favour.”

The committee refused consent on the grounds the houses would have a negative impact on the Chilterns Area of Outstanding Natural Beauty and affect traffic and amenities.

Jeannette Matelot, vice-chairwoman of the council, said: “I am a great supporter of neighbourhood plans.

“I went on the site visit and walked down the public footpath and it gave a completely different aspect. I don’t agree this field should be built on.”

Councollor David Nimmo Smith said he was surprised the land was not in the AONB.

“I don’t have an issue with filling the gap but this goes beyond that,” he said. “I was around in 1985 when Reading did a landgrab and that has not gone away.”

Councillor Joan Bland said: “If this was to go ahead it would be disastrous for the village. It can’t cope with this huge number.”

Speaking after the meeting, Cllr Harrison said: “I’m surprised with the view officers took. The fact that the whole committee voted against showed how this would impact on the area and neighbourhhood plans.”

David Bartholomew, who represents Sonning Common on OxfordshireCounty Council, said: “I am absolutely delighted that the committee has unanimously rejected the application.

“I hope developers that are watching the land in this area will take careful note.”

Councillor Fort said he assumed the developer would appeal but added: “It would be difficult to see how an inspector would see it differently.”

Mr Knott said: “We are currently reviewing our position.”