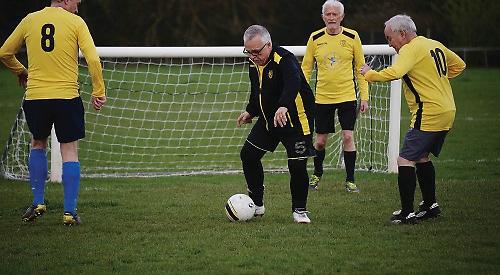 A WALKING football club in Sonning Common is expanding.

The Rotherfield United club, which is based at Bishopswood recreation ground, has started running a second weekly session.

This is because it has grown from five members to almost 30 since it began just over a year ago with help from Sonning Common health centre.

Walking football is aimed at people aged 50 and over and is the same as the normal game except running is not allowed.

The age of the Sonning Common club’s players ranges from 58 to 78.

Steve Cannan, a member of the club, said: “It is one of the fastest growing sports with proven health and fitness benefits for the over-50s.

“We are a welcoming and friendly group and games are played in a fun and safe manner. It is similar to five-a-side football but with no running and minimal physical contact.

“You don’t need to have been the Ronaldo of your generation as many of our members have minimal experience of playing football. It’s a great way to make new friends and we have a regular programme of social events as well as our regular football sessions.”

Ian Massey, a founding member, said: “There are normally 12 to 18 people at each session. Most are in their sixties but we are recruiting more players in their fifties.

“We’ve started the second session because we want more people to join the club. If the weather is bad we have an arrangement to use the indoor facilities at the Oratory School.

“The health centre, which has a tradition of promoting activity and its benefits, has also been supportive. All our players have improved their fitness since they started.”

Sessions are held at the recreation round, off Horsepond Road on Mondays from 6.30pm and on Wednesdays from 10.30am..

The club, which is sponsored by the Berkshire Physiotherapy Centre in Earley, has also entered walking football tournaments across the South-East.

For more information, call Martin Smith on 07713 981188 or email sunshinetowers@hotmail.com