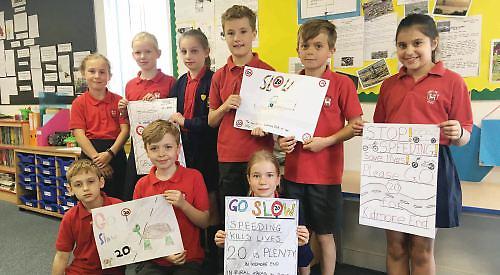 PUPILS at Kidmore End Primary School have created posters asking drivers not to speed through the village.

The year five students learned about road safety in a lesson with headteacher Linda Hull.

The parish council had the speed limit in the village cut from 30mph to 20mph in September.  It applies outside the school in Wood Lane as well as in Chalkhouse Green Road, Tokers Green Lane, Kidmore Lane and minor side roads.

Mrs Hull showed some of the posters to parish council chairwoman Sue Biggs.

The council is now considering having them made up into roadside signs and may also form a community speedwatch group.

Mrs Hull said: “This came about after I met Sue and one of the matters we discussed was speeding, which is is a problem in our village.

“The lesson was enjoyable because we explained what the problem was and asked the children how they would sort it out.”

The pupils looked at the website of the road safety charity Brake to see the impact of speeding on country roads.

The parish council paid to redue the speed limit after residents complained about speeding.

Most of the roads in the village do not have pavements, so are risky for people on foot.

In a public consultation on the speed limit reduction plan, it was supported by 46 residents and groups with only two against.