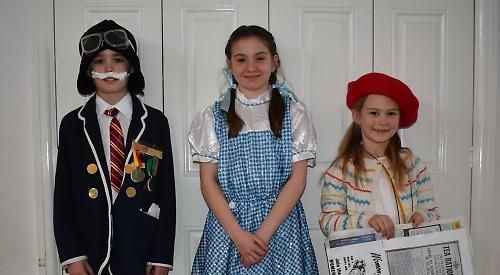 DOROTHY from The Wizard of Oz was among the costumes worn by children to celebrate World Book Day at Kidmore End Primary School.

About 200 children dressed up for a special assembly on Friday last week (March 6).

Some of the children had painted their favourite literary characters on large pieces of card.

These included the title characters from the Polly and the Wolf series by Catherine Storr.

Ella Harrington, 10, dressed as Dorothy from The Wizard of Oz and wore a blue and white checkered dress.

She said: “I’ve liked her since I was little. I just like the way she dresses.”

“It was one of my favourite books and we also have all the right stuff to make the costume,” he said.

The real-life British spy served in the Special Operations Executive during the Second World War.

Ava wore a red beret and wrapped a copy of the Henley Standard in paper depicting traditional advertising from the Forties.

She said: “I chose her because I really like spying at school sometimes. I liked that she had to hide behind a newspaper, which she pretended she was reading but actually peering over.”

Teacher Jo Salt said all the children enjoyed dressing up.

“It just helps children get into their reading and writing,” she said. “If they are good readers then it helps them with every other aspect of their education. They love taking part, it inspires them and is just good fun.”