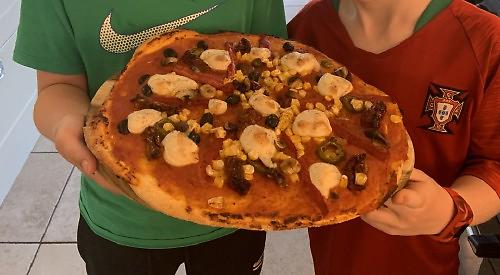 TWO young brothers in Kidmore End raised £20 for the NHS and the homeless by making pizzas for their neighbours and family.

Freddie, 10, and Woody Winter, seven, set up a “restaurant” at their home in Wood Lane, which they called Winter Uber Eats.

They then spent a day creating pizzas under the supervision of their parents, Kate and Tom, while their brother Monty, three, “helped” by eating the ingredients.

The boys made their own tomato sauce and dough but did not have any cheese so instead created a vegan substitute from cashew nuts with the help of their mother. They called their grandparents, Lyn and and Gareth Rees, who live in Chalkhouse Green, and Sandra Winter, from Caversham, to ask what toppings and side orders, such as oven chips, sweetcorn or peas, they would like.

The family then delivered the food and also dropped some off at their neighbours, Jeremy and Clare Havers. Mrs Rees received a second delivery three days later to mark her 70th birthday.

Mrs Winter sent the boys a review in the style of Trip Advisor which read: “New venue for pizzas in Chalkhouse Green and Caversham (for selected customers). Divine, tasty pizzas, delicious toppings and crispy bases. Cannot be bettered. Congratulations to chefs Fred and Woody and sous-chef Monty.”

The boys’ mother, 39, said her sons were happy to help cheer up their grandparents during the coronavirus lockdown and raise money at the same time.

“They loved it,” she said. “Each pizza cost £4 but their grandparents were generous. They were also very complimentary about both boys afterwards and said how wonderful it was and how much they had enjoyed it. It was really lovely and the boys were beaming. They speak about the homeless a lot and say if they had a lot of money they would help.

“I was quite taken aback when they suggested giving the money away but it made me realise how much they pick up about what’s going on and how aware they are of things.”

Freddie said: “We are going to be so busy that we will need to buy a motorbike to deliver pizzas and the nannas will need VIP cards.”

Woody added: “If we make £4million we can buy a Bugatti and a hot tub.”