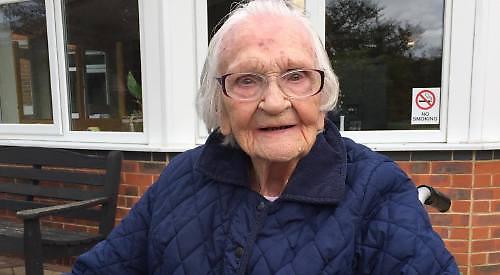 A WOMAN celebrated her 100th birthday on Saturday with a surprise singing performance by her family whom she hadn’t seen for seven months.

Irene Townsend, who is known as Rene, lived in the Kidmore End area for most of her life but has lived at a care home in Wallingford for just over a year.

Her two daughters, Lyn Rees, 70, and Terri Lewis, 73, visited her in the garden at the home where they helped her open presents and enjoyed birthday cake.

The home staff then took Mrs Townsend to the front door where her entire family were waiting to sing Happy Birthday to her.

Mrs Rees said: “She was very surprised and touched and everyone was crying. She likes the company of family the most, especially the children.”

Mrs Townsend has five grandchildren and 10 great grandchildren but she hadn’t been able to see her any members of her family since February due to the covid-19 restrictions.

She has been visited at Westgate House, the Orders of St John Care Trust home in Millington Road, Wallingford, by a member of St John the Baptist Church in Kidmore End, where she used to be a worshipper.

She married her husband, Bill, in 1945 and they lived together for 62 years in Chalkhouse Green.

Mrs Townsend was a part of the fire service during the Second Wold War.

Later she worked at a Boots store in Reading, then a pharmacy in Emmer Green.

Mrs Rees said: “She enjoyed the church and knitting and both she and Dad were avid gardeners. But it’s the family she loves the most.”

Mr Townsend was in the RAF during the war before becoming a treasurer in London.

He was president of Kidmore End Cricket Club and a member of the Kidmore End school board.

When he passed away 14 years ago, Mrs Townsend moved to Sonning Common.

“She also had the telegram from the Queen, which she was clasping in her hand when we met her,” she said.

“But she knew it was coming so it wasn’t as good as seeing everyone singing to her.

“She was delighted to see all the children — she loves them. Her greatest love is the family.”