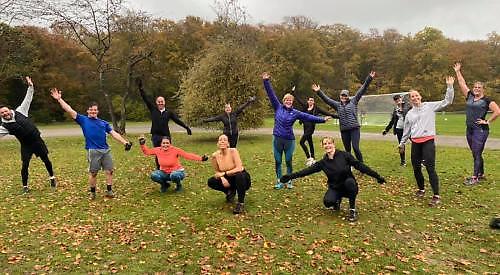 Raise the Bar, which is run by Kate Williams and Becky Hill, returned to Zoom lessons last week when the second lockdown began.

The full body workouts usually take place outside the Bishopswood sports ground near Gallowstree Common with about 30 people taking part.

The two women held the classes online from March to July in order to comply with the government restrictions.

Mrs Williams, 42, who lives in Reading, said: “I think it really helps a lot of people doing the classes online. It’s not quite the same but we do get to chat and have a laugh.

“We can see them on the Zoom calls and help them with their form. It helps people who live alone because it may be the only thing they’ve got to look forward to during lockdown.

“As soon as we are given the ‘good to go’ we will be back outdoors. After the first lockdown most members were just desperate to get back outside.”

The boot camp was first held in March 2018 in Reading but moved to Bishopswood after just two months.

Mrs Williams wanted something to do after having her children, twins Oscar and Aidan, nine, and six-year-old Jonah.

She said: “I used to be a lettings agent but when I had children that just wasn’t what I wanted to do anymore.”

She had attended boot camps run by 30-year-old Miss Hill in Reading and decided to do the same.

Mrs Williams said: “Becky and I didn’t really know each other that well but I used to attend her classes.

“We bumped into each other a year later and I said I was going to start my own boot camp and she joined in.

“We both had a real passion for running, which was our common interest, and we did crossfit sessions together in Reading.

“We saw how working with weights worked well without running and wanted to set up something with a smaller vibe. We wanted to make it accessible for everyone as gyms can be expensive.

“This way everyone can have a go and we do all our lessons outside, which keeps the costs down.”

Members can pay per class or a monthly fee.

Mrs Williams said: “Most members pay the monthly fee as it encourages them to take part in more classes. It’s not expensive and we try to accommodate people who are perhaps struggling financially.

“We have such a lovely bunch of members who stuck with us during the first lockdown and now are kindly doing so again.

“This time round people are finding it a little bit easier as we all know what’s going on as opposed to the first lockdown. We are very lucky to be able to carry on.” Mrs Williams and her husband Dan, who is a personal trainer as well as owning his own lettings company, have transformed their garage into a personal gym.

They have lent their equipment to members of the boot camp so they can carry on with the fitness sessions at home.

The classes include body weight training, barbell activities and yoga.

Mrs Williams said: “We want to give them as much as we can so people can carry on. It’s important not just for their physical health but their mental health as well.

“We are setting a challenge for them to do as much mileage as they can over the next month. We are hoping to clock up enough miles to equal the coastline of Great Britain, which is 7,723 miles.”

The pair are also raising money for First Days, a charity in Reading, which aims to reduce the long-term effects of poverty on children.

At the end of the lockdown the members will do a workout that they did beforehand to see if they can beat their reps over three different movements.

For each one that they improve they will get a minute of time allocated for Mrs Williams and Miss Hill to complete sponsored burpees.

Mrs Williams said: “We’re expecting that many of them will put in the effort and beat their reps so myself and Becky could be doing up to an hour of burpees.

“But it is all for a great cause so we don’t mind and hopefully the longer we do it, the more money we raise.”