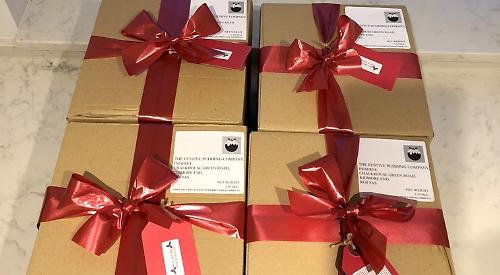 A WOMAN from Kidmore End has helped people get into the festive spirit with a virtual cooking lesson about how to make a Christmas pudding.

Kristina Stitt, 64, usually holds the annual class at St Michael’s Church in Peppard Road but it had to be cancelled this year because of the coronavirus restrictions.

She didn’t want to let people down so instead she demonstrated to more than 20 families over Zoom from her home in Blounts Court Road, where she lives with husband Huib.

Mrs Stitt works part-time at the church doing admin and spends the rest of her time running her business, K S Catering.

She has lived in Kidmore End for seven years and has been teaching the Christmas pudding classes since 2016.

“I used to live in London and I used to help out with a cooking class there,” she said. “It was a male only-evening and the ladies went out and did the shopping.

“It was a raucous event — they would make the pudding and then have a buffet, which is the part I helped with. I wanted to start the tradition here when I moved.”

Mrs Stitt began her online class by checking that everyone had all the ingredients from the pre-weighed “kits” that she had supplied.

She then encouraged her students to follow her putting sultanas, currants and raisins into a bowl together with two or three tablespoons of brandy or whisky.

Everything was then stirred together with the addition of nuts, cherries and a grated apple. Mrs Stitt then blended two eggs together with 150ml of ale and added that to the mixture ready for steaming.

She reminded people that they could leave the raw cake for up to 24 hours to soak before steaming it for five hours.

On Christmas Day, the pudding had to be steamed for another two hours before being served.

Mrs Stitt said: “It was great fun and put a smile on the faces of everybody who took part.

“Some people had their Christmas jumpers on and one couple had mulled wine. They were all in their kitchens following the steps.”

Mrs Stitt put together kits of the ingredient for people to buy and then delivered them to customers in Sonning Common, Stoke Row and Caversham.

She pre-weighed all the items and even had to be granted a licence to sell alcohol due to the ale in the recipe.

“It took two attempts to persuade the Food Standards Agency about what I was doing,” she said.

“Then you only get seven days to sell the alcohol. I rushed to get the kits to the people before the Zoom sessions and I was going to do more but because I work three days a week and people couldn’t collect the kits because of the lockdown, I was too pushed for time.”

Mrs Stitt put all the items into food bags and placed these in a box designed like a Christmas present.

She said: “It has been a miserable year, especially for the elderly who had to shield since March, so I wanted to make it look like a gift.

“It was fiddly because I had this image of how I wanted it to look.

“I had to make labels on the computer and copy and paste an image of holly and print the ingredients on the tags.”

The kits cost £15 to cover the price of ingredients and any money left over was donated to the food bank at Springwater Church in Sonning Common.

Mrs Stitt explained that usually everyone would weigh out their own items with Christmas-themed scales that she found at Lidl.

She said: “Normally, once they’ve made the puddings we do a buffet and have mulled wine and camembert. Every year we like to do something. It’s a sociable event, so I wanted to make sure something happened this year.

“Most people who take part are older and they go back to their families with their Christmas pudding and feel they have contributed.

“We usually do the mixing in St Michael’s hall and they take the pudding home and steam it there.

“Then they email me pictures to show me the finished masterpiece.”

For her business, Mrs Stitt caters for different occasions, such as birthday parties.

“We specialise in buffet-type food and canopés,” she said. “I’m not doing as much catering because of covid-19 so I’m looking at different ways of changing the business.”

Mrs Stitt, who has three children, hopes her Christmas pudding lesson will be able to return as normal next year.

She said: “Christmas is so special to a lot of people, particularly the elderly. It is the guaranteed time of year people get together and feel special.

“People in the village have been amazing during lockdown and the churches in Sonning Common have been great and supportive.”