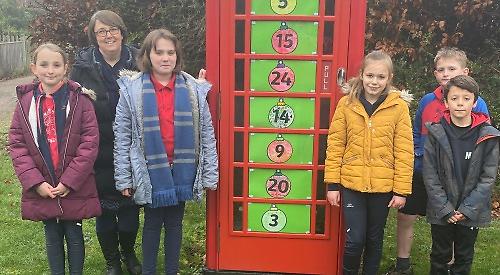 AN old telephone kiosk in Kidmore End has been turned into a giant advent calendar for the second Christmas in a row.

The windows of the former BT phone box in Wood Lane have been decorated with 24 double-sided cards by children from the village primary school in Chalkhouse Green Road.

One side has a numbered Christmas ornament and the other shows a festive drawing by a pupil.

The images include candy canes, crackers, Christmas puddings and a Nativity scene for Christmas Eve.

Organiser Sue Remenyi, who lives in the village, said: “Each week children will turn the numbers around to display a picture in the window and on the last day of school the final pictures will be revealed.

“Thereafter a Christmas tree will be lit inside the telephone box for the rest of the Christmas period.

“After the success of the advent calendar in the telephone box last year, the primary school were quick to ask if they could do it again this year. At the start of the month, I met [headteacher] Linda Hull and five class representatives from years five and six to fix the numbers to the telephone box glass panes — how lucky are we that a traditional telephone box has 24 panes of glass.”

Mrs Hull said: “Year two pupils drew the advent pictures and year one decorated the numbers for each window.

“We hope the advent calendar brightens up the village and makes people smile each time they walk past.

“It is a great example of the school and village community working together and we are busy working on pictures for the other phone boxes at Chalkhouse Green and Gallowstree Common.”

There is a box inside the kiosk for residents to put in donations for the Readifood food bank.

Mrs Hull said: “We have already collected one large bag of groceries and hope to get more before the end of the school term.”