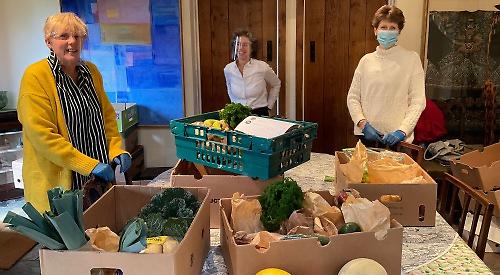 A FOOD delivery service which has helped people in need during the coronavirus crisis is to double as a “conversation café”.

Now the group, which is based in Kidmore End, plans to launch a social hub for people who have become isolated as a result of the pandemic when the restrictions are eased.

This will operate from the village’s parish room in Wood Lane between 11am and noon on Wednesdays and will be open to all age groups.

South Oxfordshire is in lockdown so people are not allowed to meet indoors and can only meet one person outdoors.

Jane Mather, who founded Local Veg and runs it from her home in Horsepond Road, Kidmore End, came up with the idea for the café when volunteer and fellow villager Sarah Wilkinson suggested they find a more suitable base from which to operate.

Mrs Mather, who lives with her husband James and their border terrier Thwaite, said: “Kidmore End parish room said we could use that for free from January so we thought, ‘ Why not also open up a café?’

“Two volunteers will offer to help each week, so with 10 volunteers altogether, they will only have to do it once a month and we already have the volunteers, which is great.

“The café will serve tea and biscuits. It’s about self-help as people can come off their own back, saying that they need help.”

The three main organisers are Mrs Mathers, Mrs Wilkinson and Sally Rintoul, who started volunteering after reading an article in the Henley Standard in June about how Local Veg was to expand and needed more helpers. The service has now made 400 deliveries to 38 households since it started and has turned over £12,500.

Mrs Mather, who sold her Jane Makower fabrics brand three years ago, was already running a conversation café in Christ Church in Woodley, where her husband is a minister.

She said: “The café went really well until lockdown but we still do weekly meetings over Zoom.  We even got my nephew, Louis, to come and talk about his experience with lockdown while at university. It was great.”

Mrs Mather decided to establish a support network after being asked by Kidmore End Parish Council chairwoman Caroline Aldridge if she would consider checking on the elderly and people in self-isolation in Gallowstree Common.

This developed into a food supply network when she realised there was a wider problem with sourcing products amid panic buying at the start of the crisis.

“It was really quite desperate with supermarkets not being able to deliver,” said Mrs Mather. “It was a really big problem and this was an alternative so people’s next door neighbours didn’t have to go shopping for them.”

Residents order vegetable and fruit boxes supplied by Dudmans of Berkshire in Emmer Green each week and the volunteers deliver them.

The volunteers also deliver eggs and meat products from Carl Wood’s Butchers in Sonning Common and bread, doughnuts and cakes from Warings Bakery in Reading as well as milk.

Mrs Mathers said that starting Local Veg had been “a lifesaver”.

She said: “It feels worthwhile and is a big deal for me. It has given me a lot more confidence and in a funny way some meaning to who I am now.”

There were fears that the food delivery service would stop once the first lockdown ended but Mrs Mathers said it had continued due to demand and was now a “sustainable enterprise”.