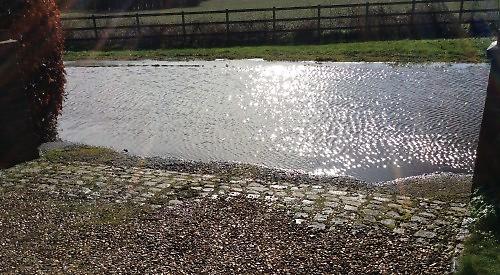 AN elderly couple from Kidmore End have complained on five occasions about flooding outside their home — and the problem has still not been solved.

John and Susan McNie, who have lived in Butlers Orchard for more than 30 years, say the road outside their cottage floods after heavy rainfall at least twice a year.

Mrs McNie, who is her eighties, said: “There are about five other homes it affects and they have all complained to the council.

“Despite reporting this several times, we have continued to have this flood outside our gate on numerous occasions.

”We have to wear wellingtons to go out and it has even had ducks on it.”

She said the flooding didn’t happen every time it rained and you could still drive a vehicle through the water but it was still “frustrating”.

“The problem is with the drains as we can see the leaves blocking them,” said Mrs McNie.

“One of our neighbours has even tried to unblock them himself.  It also affects people who walk through the area. I’ve contacted the county council four to five times but I only ever get an automated response.”

A spokesman for Oxfordshire County Council said engineers were last called to the street in November and used a gully emptier to investigate and clear a blockage.

“The gullies were then cleaned and the water tested before we left,” he said.

“However, this is a recurring problem and more investigation is required to locate the cause of the problem and identify a solution.

“While Oxfordshire County Council is responsible for highway drainage, the problem can be related to other drainage infrastructure, such as soakaways, a private ditch, stream or culvert, and this can complicate the issue and resolving the problem may take additional time.”

Meanwhile, a flooding problem near the car park by the Co-op store in Wood Lane, Sonning Common, is to be investigated.

David Bartholomew, who represents the village on the county council, told a meeting of the parish council that a survey to identify the cause would take place in March.