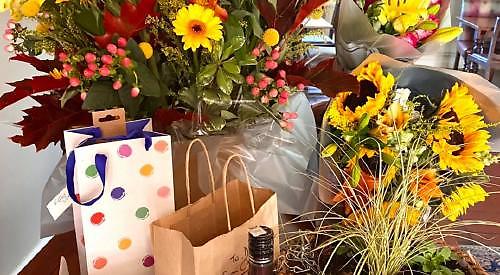 THE landlady of the pub in Kidmore End held a party to celebrate her 10th anniversary of being in charge.

Dora Syzmborska was 32 when she took over the New Inn in Chalkhouse Green Road, which is owned by Henley pub company Brakspear.

The business also offers bed and breakfast and hosts functions such as wedding receptions.

More than 250 people attended the party, which featured a barbecue and hog roast. A rock band called Tractor  performed.

Guests were asked to donate money to go towards the upkeep of the village cemetery in Coopers Pightle and £475 was raised.

Ms Syzmborska, who lives on the premises part-time with her partner James, said she hadn’t meant to manage the pub for anything like a decade.

“My goal was to have the role for three years and I was going to see how it went, then the second contract came and now here we are,” she said.

“We did celebrate my fourth, fifth and seventh anniversaries, but I didn’t know if I would reach 10 years and all of sudden it was here.

“To be honest, I wasn’t even thinking about it — it’s a scary thought. It is such an amazing step in life.”

She said the party was “amazing” and the food practically sold out. “I think there was only three sausages left and a small bit of hog roast,” she said.

Ms Syzmborska said she coped during the coronavirus pandemic despite the loss of trade by keeping herself busy.

“The first days were a little bit weird,” she said. “I had the whole property to myself and I could go and have a coffee wearing a bathrobe and no one would bother you.  I had the biggest property in the village to myself.

“We just didn’t know what was going to happen so for every lockdown I had small jobs to do like decorating or painting. I was keeping myself busy so there was no time to be bored. I was staying strong, thinking ‘one day we will be open again’.

“I remember when we opened again on April 12 — it was outside only so I got a marquee, a fire pit and blankets and I got up in the morning and there was snow.

“I was thinking, ‘This is incredible — no one is going to come because who will bother’ but I think we had about 180 people throughout the day.

“It’s a blessing to be loved by the locals and to get all that support from residents.”

Ms Syzmborska said one of her fondest memories of the last decade was of the late John Lambourne, from Sonning Common.

Mr Lambourne, who died in December 2019, was well known for the spectacular Christmas lights display he would create outside his bungalow in Kennylands Road each year.

He and his wife Carole raised money for Great Ormond Street Hospital for children in London.

“John really stood out for me,” said Ms Syzmborska. “We celebrated our birthdays in 2019 with a joint party.

“I remember him because he would feed you with energy.  He was always so optimistic and there was no situation without a solution with him.

“He did a spectacular job with the Christmas lights and he started the tractor runs, which are still very popular.”

Ms Syzmborska said that from now on she planned to celebrate her anniversary annually as she didn’t know how much longer she would stay at the New Inn.

“Someone asked if I would stay around for another 10 years and I said, ‘Don’t scare me’,” she said.

“My plans are to stick around as I’m still loving it here but life is full of surprises. I may move one year.”

Ms Syzmborska thanked Brakspear, saying the company had made her feel supported, especially during the pandemic.

She said: “I’ve never had a problem with them and we always work so well together. They made us feel we could survive the pandemic.

“I also want to thank my friends, the regulars and the residents.”