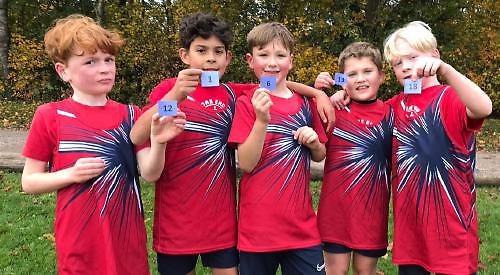 Carter Kerman, eight, was one of 45 children who took part in the event at Bishopswood Sports Ground in Gallowstree Road.

He came first in the 1.5km race for under nine boys as well as in the team race with four classmates — William Olley, who came sixth overall, Ambrose Paviour (12th), Jacob Viney (13th) and Dexter Penney (18th).

About 20 other children from the school in Chalkhouse Green Road took part in the event, which also featured an under nine girls’ race and two more races for boys and girls under 11.

Carter said: “It felt amazing to win the race. It has encouraged me to keep running — we do a running club round the school field each week.”

William, nine, said: “We had to run quite a long way as it was quite a big field and we had to complete two laps.

“We had to try to stay together as a group. The hardest part was probably going down the hills as we went really fast.

“Going up the hill on the last lap was hard as everyone was together pushing. The best bit was when we finished.”

Headteacher Andrew Griffin, who started at the school in July, said all the pupils ran well.

He said: “Carter came from behind to overtake the two people in front of him and he did a fantastic job, winning with some distance to spare.

“Every week, pupils from each year have a running competition from 8am to 8.40am. On Friday mornings, children and parents do fun activities such as 10 lap challenges or 15-minute challenges.

“Our school dog also takes part, which is great. That has really encouraged a lot more children to run.

“There’s about 20 per cent of the school running each morning. About seven parents take part as well and that really helps the children understand the importance of exercise on physical and mental wellbeing.

“Running is a passion of mine and I run a lot with my dog so to see the pupils running together and competing and enjoying it is special.

“We have some fantastic runners and everyone is improving, which is fantastic to see. They look forward to Friday mornings.”