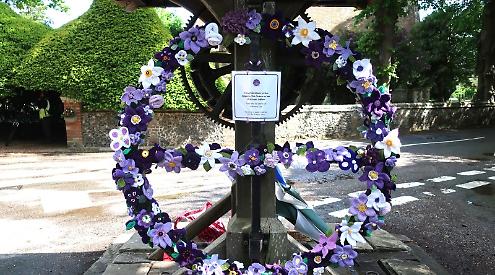 THE well in Kidmore End was covered with knitted flowers to mark the Queen’s platinum jubilee.

Eight women from the village’s Knit & Natter group created 171 flowers of different shapes and sizes in purple, lilac and white over many months.

Caroline McAslan came up with the idea to cover the big wheel of the well to celebrate the Queen’s 70 years on the throne.

She said: “We were delighted to find many villagers stopping their cars to say how much they appreciated our work. Passing cyclists stopped to take photos.

“Unlike real flowers, this installation can go on for a few more weeks.” The women also tidied up the flagstones, removed weeds and swept away dirt around the well.

The woollen display was attached to green netting twisted round the wheel and bunting was added.

Since the bank holiday jubilee weekend, those flowers have been replaced by white ones to match the wedding on of a resident.

The Knit & Natter Group was formed in April last year and the members meet every Tuesday afternoon in each other’s homes on a rotational basis to talk and work on various projects.

Mrs McAslan said: “There is a strong bond between all the ladies who, through chatting, support each other as together they face some difficult issues in their lives.”

Previously, the women have knitted tiny jackets and blankets for premature babies in the neonatal ward at the Royal Berkshire Hospital in Reading.

In April they installed a knitted sunflower display at the well to show solidarity with the Ukrainian people.

The jubilee flowers and their brooch pins will be sold in aid of the village school and church.