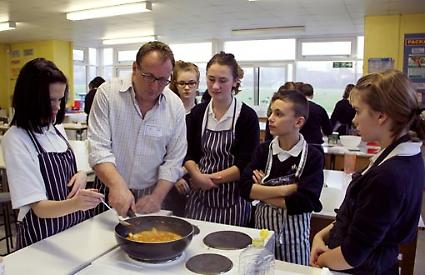 PUPILS at Langtree School in Woodcote enjoyed a range of activities as part of a creativity day.

The school bell was switched off and the timetable suspended as all 550 students took part in themed workshops.

Click here to view our picture gallery of some of the events that took place.

Year 7 students attended a samba class where they were taught about the history and culture of the traditional Brazilian dance. They learned how to play samba rhythms and then performed the dance.

One group of year 8 and 9 students studied the topic of space.

They designed habitats for living on Mars, wrote short stories about alien encounters and entered an inflatable planetarium provided by Winchester Science Centre.

Another group visited Bletchley Park to learn about its role in cracking coded German transmissions during the Second World War. A third group was given a masterclass in Indian cookery by chef Paul Burrows, of the Highwayman pub-restaurant in Exlade Street.

Year 10 pupils visited the British Museum to support their ancient history studies or took part in science experiments at the school.

Year 11 students were given mock job interviews by local business owners and learned revision skills for this years GCSEs.

This was the third year running that the school has held a creativity day.

They let the students take control and to use their imaginations and natural spirit of enquiry. The students have a lot of fun and the school buzzes with excitement on these days. It is a great experience to be part of.