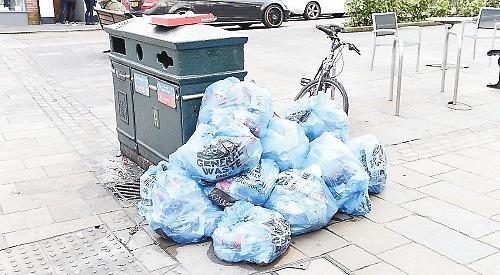 Sirs, — Many of the traders in Henley went out of their way to make the Festive Sunday Shopping event a success.

Sadly, Starbucks was not one of them. What Starbucks did to add to the festive atmosphere was pile all its rubbish in the square next to the bins.

This would appear to be its standard operating procedure and I, for one, feel strongly that it needs to be stopped.

Starbucks should keep all its rubbish within its premises until it is ready to be collected rather than using the market square as a dumping ground.

Personally, I find the company’s behaviour totally disgraceful and unacceptable. — Yours faithfully,

Sir, — Unfortunately, the problem of overflowing bins is more widespread than you reported (Standard, December 9).

There are bins in Gravel Hill, Paradise Road and Deanfield which, at the time of writing (Thursday last week), have been overflowing since the weekend.

Having them emptied proves to be surprisingly difficult.

I assumed that the bins would be cleared on Monday. When on Tuesday they were still overflowing, I phoned the town hall to report the problem and was told to call Biffa. This I did, reporting the problem to a waste management executive, who assured me that the matter would be dealt with within 48 hours.

On Thursday afternoon, with the bins still overflowing, I phoned again, pointing this out.

I was told that the Tuesday report had been handed on to the relevant section of Biffa and that this repeat report would likewise be forwarded.

In effect, bins that were already full on Monday morning have not been emptied for four days.

This may be a one-off failure or it may be the outcome of a change in bin clearing frequency. Either way, the results are unacceptable; littering is encouraged, uneaten food attracts rodents, the attractiveness of the town is affected.

Worryingly, it seems that bin servicing is failing to keep abreast of bin use and the council may need to negotiate greater frequency of bin emptying with the service provider, Biffa. — Yours faithfully,