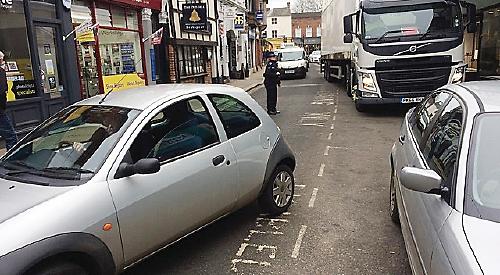 Sir, — Here is an example of why the traffic congestion in Henley happens.

Last week, gridlock was caused by a Ford Ka unlawfully parked in the Bell Street loading bay, in front of a Boots articulated lorry, until eventually a police officer arrived to make the driver move.

A Waitrose articulated lorry was blocking the main junction in the centre of Henley because it could not pass the Boots lorry that was trying to deliver to Boots and could not get into the loading bay because of cars.

Meanwhile, other vehicles could not pass the Boots articulated lorry because the rear stuck out too far.

After the Ford Ka moved, the Boots lorry could edge forward until, finally, there was enough space for the driver to pull in sufficiently for the other vehicles to pass.

Meanwhile, right at the back, the Waitrose lorry was still blocking the junction because of the illegal use of the loading bay by the Ford Ka and a BMW, which had a blue badge.

However, there was barely enough room for the Boots delivery truck to straighten up.

This begs the question, should any domestic vehicles be allowed to use the loading bays, including disabled people’s vehicles, if they risk preventing delivery lorries from being able to fit into the loading bays? — Yours faithfully,